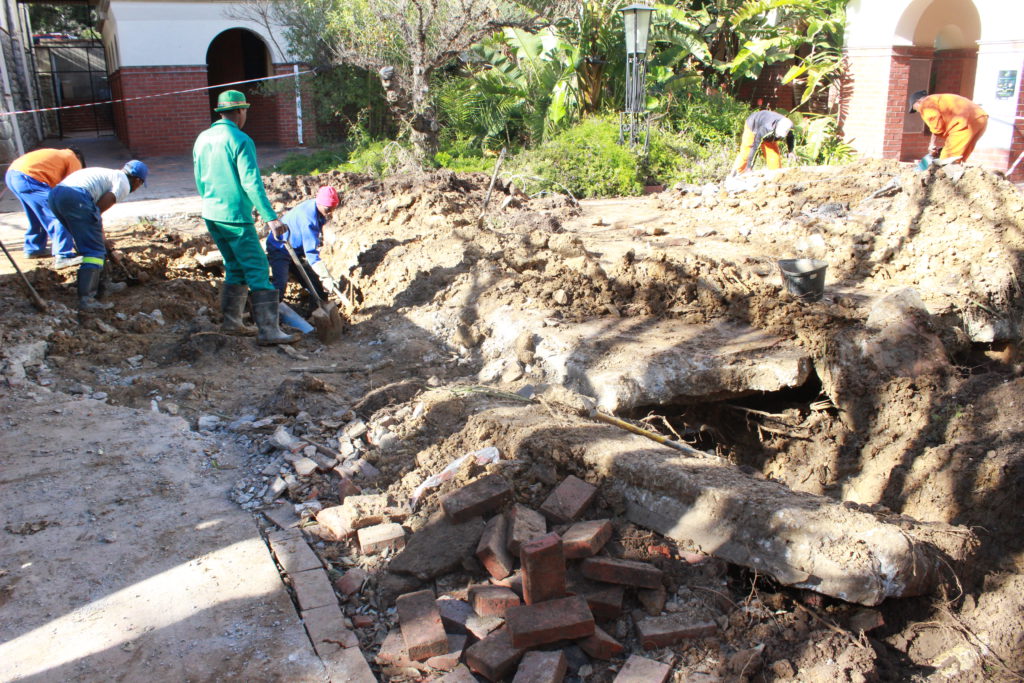 A Makana Municipality official says the recent spate of blockages and sewage line leaks in Grahamstown is due to a build-up of grease, debris and foreign objects in the sewer system, exacerbated by the heavy rains in August.

“The sewer line collapsed due to ageing,” Mjekula said. He said the municipality is in constant touch with Rhodes once blockages are reported.

Last week, sewage was overflowing from an inspection cover in Artillery Road on the Rhodes University campus and a staff member in a nearby building told Grocott’s Mail that municipal workers had had tried to unblock the drain two weeks previously but that the problem had recurred.

Municipal workers had also come to South Street to attend to two leakage problems in South Street inside the Rhodes University campus. In one instance, they fixed an old and unused water pipe in late June, just before the National Arts Festival, but did not do a proper job and it leaked again, forcing Rhodes to hire private plumbers to complete the job.  Edwin Gcamana, a plumber with the company, Grahamstown Homebuilders, told Grocott’s Mail  on 29 August that the municipal workers had bypassed the old clay pipe but it had still filled up with water again. Gcamana said this was not the first time they had been called in by Rhodes University.

In a separate incident in South Street, on 25 August, a bulk water pipe burst, sending water gushing into the air. Dave Martin, Manager of Rhodes’ Engineering and Transport Maintenance Department, told Grocott’s Mail that municipal workers had responded timeously to stop the leak. Grocott’s Mail has observed that the two work-sites are still uncovered, making driving and pedestrian traffic in the street hazardous.

The university sent its plumbers to fix another burst water pipe outside its printing and stationery unit at the end of last month.  Deputy director of Infrastructure and Operations at Rhodes, Dawie Van Dyk, told Grocott’s Mail that this pipe belonged to the municipality.

As with the bulk water pipes, certain streets on campus (such as South Street, Lucas Avenue and Prince Alfred) belong to the municipality and they have a responsibility to deal with them, according to municipal by-laws.

Water leakage and overflowing sewers are not restricted to Rhodes campus, either. In the upmarket suburb of West Hill, for example, there are another two problem areas. At the corner of Leicester and Bowles streets is a large hole filled with rainwater that could be a danger to pedestrians.

A homeowner in Leicester Street told Grocott’s Mail that he was worried because he has small children. He recounted how municipal officials were called during night to attend to a burst water pipe a few months ago. “They only came the following day,” the man who did not want to be named, said. The workers came the next day, but only after being called again. They’d experienced a water outage for two to three weeks that it took the municipality to repair the leak, the man said.

Residents said sewage had been overflowing from an inspection cover in Warren Street.

At Rhodes, Van Dyk said the university has regular meetings with Makana’s infrastructure Director Dali Mlenzana and acknowledged that the financial crisis was mainly to blame for their inability to respond promptly. “I understand that,” Van Dyk said.

Also at Rhodes, Martin said that because the municipality was overwhelmed, they now only attended to major problems.