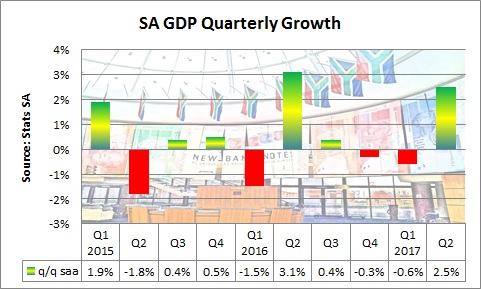 In terms of detail, the production measure of GDP showed that the weakness in the first quarter was broad-based with only the agriculture and mining sectors expanding out of the ten production sectors, while in the second quarters it was only two sectors that declined. These sectors were construction and government services. From an expenditure point of view, there were only three out of the six categories that had a negative contribution to growth. Exports soared by 14.4% q/q saa to contribute 4.1 percentage points to growth, but this was offset to a large extent by a 13.3% q/q saa jump in imports which reduce growth by 3.9 percentage points. Net exports, which is the difference between export and import growth, therefore only contributed 0.2 percentage points to growth. Although inventories added a further R5.3bn worth of goods to stocks, the increase was less than in the first quarter, so the change in inventories reduced growth by 0.2 percentage points. The final negative factor was a 2.6% q/q saa decline in gross fixed capital formation as investment in housing slumped. Contrary to perceptions that drop in fixed investment after two quarters of growth was not due to poor business confidence, but rather due to poor consumer confidence and /or the  reduced willingness of commercial banks to lend for housing investment. This is reflected in the real decline in mortgage lending. The bottom line however is that the second quarter was as much an anomaly as the first quarter when it comes to quarterly growth rates, so to look at trends in the economy it is better to look at the year-on-year rates. In that respect the economy is on a recovery track as y/y growth in the second quarter edged up to 1.1% from 1.0% in the first quarter. For the first half, growth was 1.1% y/y, which is closer to the 1.3% growth forecast for the full year of Treasury, rather than the 0.5% forecast of the South African Reserve Bank.

The growth in the second half will largely depend on a continued rise in exports as the bounce from the record maize harvest will fade as harvesting was in most cases completed in August.