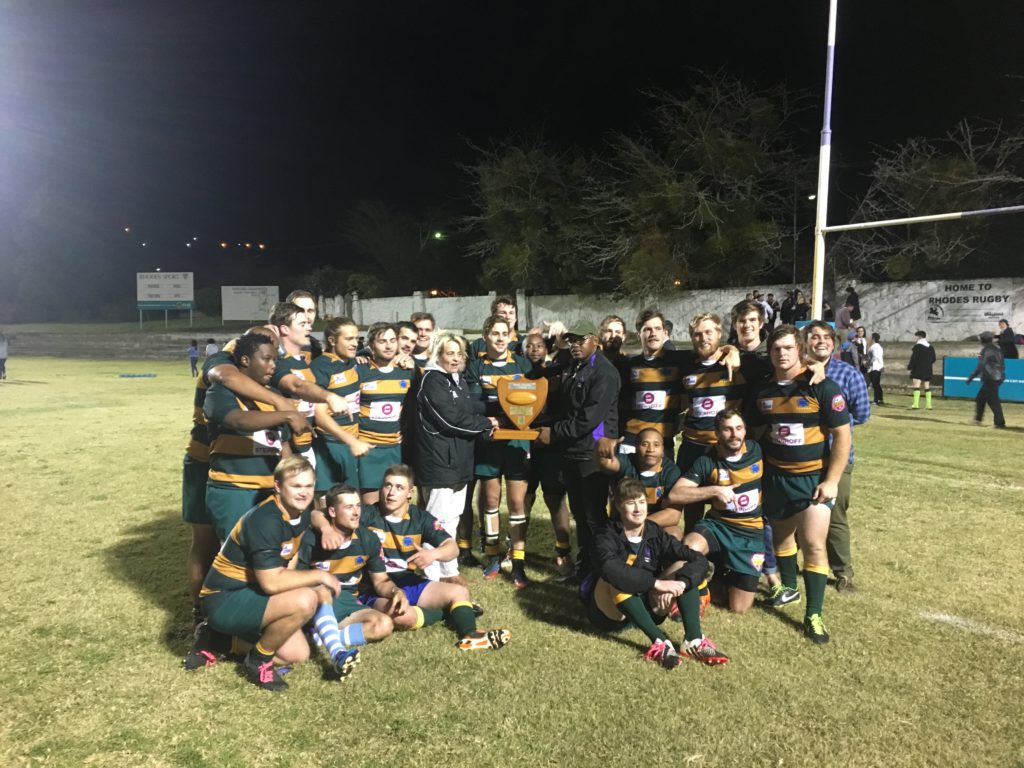 Dream Team are awarded the Rhodes Internal League trophy at the end of a long and tough season. Photo: Stephen Kisbey-Green

The 2017 edition of the Steinhoff International Rhodes University Internal League for 2017 culminated on Friday evening, when Dream Team saw off Troopers by 13-8.

The final, which brought an end to weeks of internal league action, got off to a rather slow start. After a see-saw first 35-minutes of action, Dream Team’s Ryan Horne was put into space out wide, managing to finish off a well-worked effort after a scintillating break. Dylan Stephens’ successful conversion meant the “Green and Yellows” went out to an 8-0 lead.

The second-half got off to a much more explosive start when, just two-minutes in, Dream Team grabbed their second five-pointer courtesy of a snipe by scrumhalf Grant Hewitt – the conversion was missed.

Troopers were not to be outdone however, and burly hooker Uzu Nyanda powered his way over 10-minutes later. The effort was converted by Aviwe Ntutu, and the scores read 13-8.

Some massive hits on defence allowed for Dream Team to withstand a barrage of attacking waves from their rivals, and keep their foothold on the game.

Dream Team’s Stephens had an attempt at a penalty late on, but his miss didn’t matter two-minutes later when the ball was booted into touch and his side were crowned 2017 champions.

The internal league’s director, Elize Everton, reflected on what has been a massively successful campaign for local rugby.

“There were a lot more teams this year; going from five teams last year to eight now has been huge. We’re big into community engagement, and we’re happy with how the ;league went this year.

“It’s been difficult. There’s definitely some work we still need to do to ensure a much smoother run in the future, but it has been really good. There’s always room for improvement, but generally I’ve been very impressed.”

The match for the third and fourth place of the Inter Rugby League was all in all quite disappointing in that it was over before it had even started.

The Hill team was given an automatic victory due to the Heathens side not being able to field the minimum required 15 players needed for an official match.

The teams did however play a friendly game so the players who did show up were given a chance to play, and also for the spectators who were in support before the final. Heathens won the friendly 37-34.