Exports hold the key to growth this year 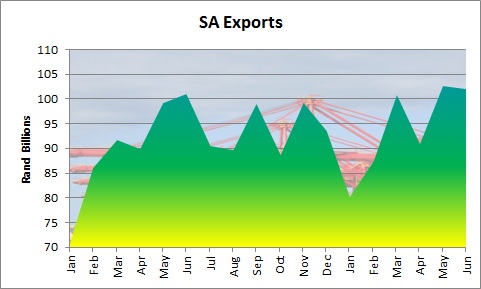 Exports hold the key to economic growth this year as the three other main components of the economy, namely household consumption, government consumption and investment could decline or will have subdued growth at best.

Household consumption remains under pressure due to high unemployment, little job creation and the ever-present threat of further retrenchments as businesses react to subdued domestic demand. The Treasury in February expected household consumption growth to increase slightly to a 1.3% pace this year from only 0.8% last year, but it would remain below the 1.7% rise achieved in 2015.

Government consumption is forecast to ease to only a 0.9% rise this year after a 2.0% increase last year, which was boosted by the local government elections in August. Given the pressure on the Treasury this year, the 0.9% rise may turn out to be optimistic.

Investment consists of fixed investment in plant or buildings, as well as in inventories. The poor business confidence means that executives are unlikely to start new projects this year, but old projects that are already under way, such as those by Eskom and the Independent Power Producers, will continue.

In the first quarter 2017, South African executives were fairly optimistic based on an end to the drought, lower inflation, a flat interest rate outlook, ongoing weak rand benefits, the firming of commodity prices and reduced electricity supply constraints. When asked to outline the ways in which economic uncertainty after the sacking of Pravin Gordhan and the subsequent ratings downgrade affected their business decisions, 37% of total respondents stated they were delaying business expansion plans, 32% were putting off investment decisions, while 26% of these executives are considering investing offshore (possibly in a more stable business environment), and 17% are weighing up decisions to sell their business. According to Grant Thornton’s survey, the top three constraints to business growth for South African executives are: economic uncertainty (66%); exchange rate fluctuation (50%); and over-regulation / red tape (30%).

There should be a boost from an increase in inventories, but if consumer and business confidence remains subdued, then this could be of only marginal impact. The farming community believe that a large part of the record 16 million tonnes maize harvest this year will land up in silos to be carried over as inventory for next year.

That means that exports will have to shoulder most of the burden for growth this year in the same way that the Proteas have to rely on one or two individuals to occasionally carry the team. The good news here is that exports are running at record levels above R100 billion per month and the second quarter 2017 trade surplus of R22 billion was the largest quarterly surplus since 2011, when commodity prices were near record levels.

This good news is confirmed by the economists at the International Monetary Fund (IMF) who expect that the pickup in global growth anticipated in the April 2017 World Economic Outlook remains on track in their July update. Global output is projected to grow by 3.5% in 2017 and 3.6% in 2018 from only 3.2% in 2016. Especially significant for South Africa is that our two largest trading partners, the Eurozone and China, have had their growth revised higher as the early data from 2017 has surprised on the up side.

“Positive surprises to activity in late 2016 and early 2017 point to solid momentum in the Eurozone, while China’s growth projections have also been revised up, reflecting a strong first quarter of 2017 and expectations of continued fiscal support,” the IMF said.

The IMF was fairly balanced when it came to its risk assessment as it said the pickup in activity in the Eurozone with buoyant market sentiment and reduced political risks, could be stronger and more durable than currently projected. As the Eurozone is South Africa’s largest trading partner that means our risk assessment is skewed towards the upside, in other words growth could come in higher than currently anticipated. On the downside, it said protracted policy uncertainty or other shocks could trigger a correction in rich market valuations, especially for equities, and an increase in volatility from current very low levels. At present the Johannesburg Stock Exchange all share index is setting new record highs as equity investors look through the current political uncertainty and anticipate better growth next year.