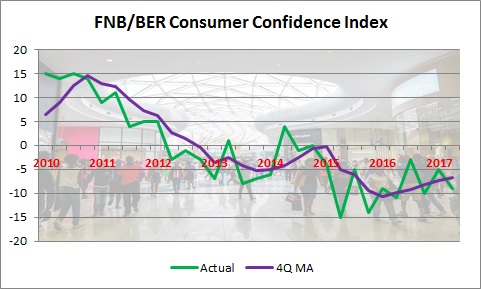 Consumer confidence surveys provide regular assessments of consumer attitudes and expectations and give an indication of economic trends and prospects so retailers and manufacturers can adjust their inventories. Consumer confidence is expressed as a net balance. The net balance is derived as the percentage of respondents expecting an improvement / good time to buy durable goods less the percentage expecting a deterioration / bad time to buy durable goods.

A low level of confidence indicates that consumers are concerned about the future. They may be worried about job security, pay raises and bonuses or inflation. That is why the confidence surveys need to be confirmed by inflation data, employment figures and trends in real take-home pay as reflected by the  BankservAfrica Disposable Salary Index (BDSI) and their financial vulnerability, which gives an indication of their ability to take on more debt. When confidence is low consumers tend to cut discretionary spending and buy only to basic necessities such as food and electricity. When confidence is high, consumers can then incur debt and increase spending on discretionary items, such as furniture, household equipment, motor vehicles, clothing and footwear. A rise in consumer confidence should therefore result in an improvement in the second half of this year in household consumption spending, which contracted in the first quarter, as well as retail and motor vehicle sales.

The main driver of the fall in consumer confidence in the second quarter was a sharp reversal in consumers’ view on economic prospects. In the first quarter, consumers were fairly confident about future economic conditions due to the abundant rain in the summer rainfall area, a stronger rand and the consequent moderation in food inflation. However, consumers reversed their view on the prospects for the economy in the second quarter due to the late March cabinet reshuffle and consequent ratings downgrade to junk status. The economic outlook sub-index moved from -23 in the fourth quarter to -1 in the first quarter and then back down to -22 in the second quarter.

Despite the fall in the economic outlook index, the index reflecting consumers’ view of their own finances improved due to the fall in food and energy costs. The index improved to +6 in the second quarter from +3 in the first quarter.

The index measuring the appropriateness of the present time to buy durable goods, such as furniture, appliances and electronic equipment also improved to the best level since the third quarter 2015. It rose to -12 in the second quarter 2017 from -17 in the first quarter.

Although consumer confidence levels remain depressed, they continue to be better than the recent lows reached in 2015. The improvement in new vehicle sales in June from a year ago may therefor reflect a recovery in consumer confidence going forward.