Informal settlements: To eradicate or to upgrade is not the question 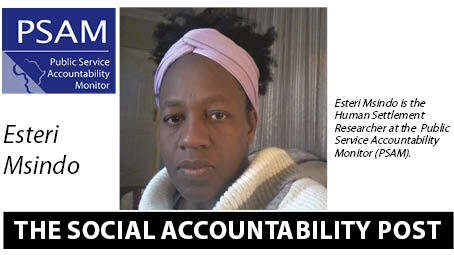 On 27 June, the Grocotts Mail published an article “Concern over Grahamstown land grabs”. In the article, a self-appointed committee was allocating land on a vacant plot opposite the Mayfield Extension 10 Housing Development. The councilor for ward 3 said he was not aware of the ongoing land grabs, until he saw about 300 people queuing for land in Extension 10. He said that people who had their own agenda misled these people. However, the councilor noted that if the mayor does not address the people, they would not stop.

There is shortage of housing for the needy in South Africa and particularly suitable land for the state to build RDP houses. Several housing protests have been happening across the country with housing and land being the major drivers of these protests. Although the state has made some strides in the provision of RDP houses, the expansion of cities and growth of the urban population makes it difficult for the government to meet the demand for housing. As a result, illegal land occupation and the continued growth of informal settlements has become a challenge.

What is currently happening in the establishment of human settlements is a reflection of  the complex nature of housing demand and hence policy formulation in South Africa. On the one hand, political representatives make policy decisions that seek to redress past injustices and provide housing for the needy. On the other hand, the challenges on the ground in terms of implementation of policy places the government in a cycle of reinventing policy with no practical or final solutions to the challenges of housing demand. Illegal/informal land occupation currently does not only inform policy, but also continues to complicate the process of housing delivery.

Land invasion or illegal occupation of land happens when community members decide without permission from local authorities to occupy land and build dwelling structures. Illegal occupation of land and the construction of informal dwellings in urban areas is indicative of the increasing housing needs for the low-income earners and the unemployed. With no hope of becoming part of the formal property market and the systemic delays characterising housing delivery in South Africa, the only option for the low-income earners or the less advantaged is to randomly occupy pieces of urban land and build shacks. Whether the land they occupy is serviced (i.e having piped water and sewer systems) is not the question. Illegal occupiers simply make a place for themselves to stay. Once a piece of land is occupied for a lengthy period, an informal settlement is established. Evictions from the land is a difficult process and is often resisted through violent protests.

Importantly, the law protects informal dwellers from illegal evictions. Section 26 (3) of the Constitution states that ‘no one may be evicted from their home, or have their home demolished without an order of court made after considering all relevant circumstances’. The Prevention of Illegal Eviction Act (PIE) prevents any eviction that takes place without considering the circumstances of the illegal occupants. There should be alternative accommodation provided for the people facing eviction. No eviction is legal if it will leave people homeless. PIE protects the rights of both the owner of the property and the occupant. When an eviction is done according to PIE requirements, it is legal and (in the event that the matter is taken to court) – a judge can rule in favour of the owners of the property. Although PIE Act protects both parties, the Act has been effectively used mostly to protect illegal occupiers from being evicted and evictions have become more complex and difficult.

In 2017 the Constitutional Court ruled in favour of 184 residents who occupied Erven 87 and 88 in Berea in Johannesburg. The constitutional court reversed the high court ruling in favour of the evicted residents. The constitutional court indicated that the high court judge had not ensured that the complainants were fully informed about their rights before the eviction was carried out and that the judge had not ensured that the people would not be rendered homeless. The ruling is indeed a victory for the low-income earners and the unemployed because their rights to shelter are protected. It however places the state in a precarious position where it becomes practically impossible to evict illegal occupants from land that was meant for construction of houses. It also means community members can decide to occupy any piece of land knowing that once they are there it becomes difficult for them to be moved and be settled elsewhere.

The Department of Human Settlements has drafted a White Paper, which will inform policy going forward. Upgrading of informal settlements continues to be part of the agenda for the department of Human Settlements. There is no question about whether to eradicate/evict. The focus is on bringing dignity to communities by upgrading informal settlements. However, will upgrading of informal settlements truly bring about the realization of the right to housing embedded in section 26 of the Constitution where- ‘everyone has a right to adequate housing,’. Is government able to deliver on its constitutional mandate of providing adequate housing? Does human settlement policy effectively help in addressing the challenges of housing delivery going forward?