My story of survival 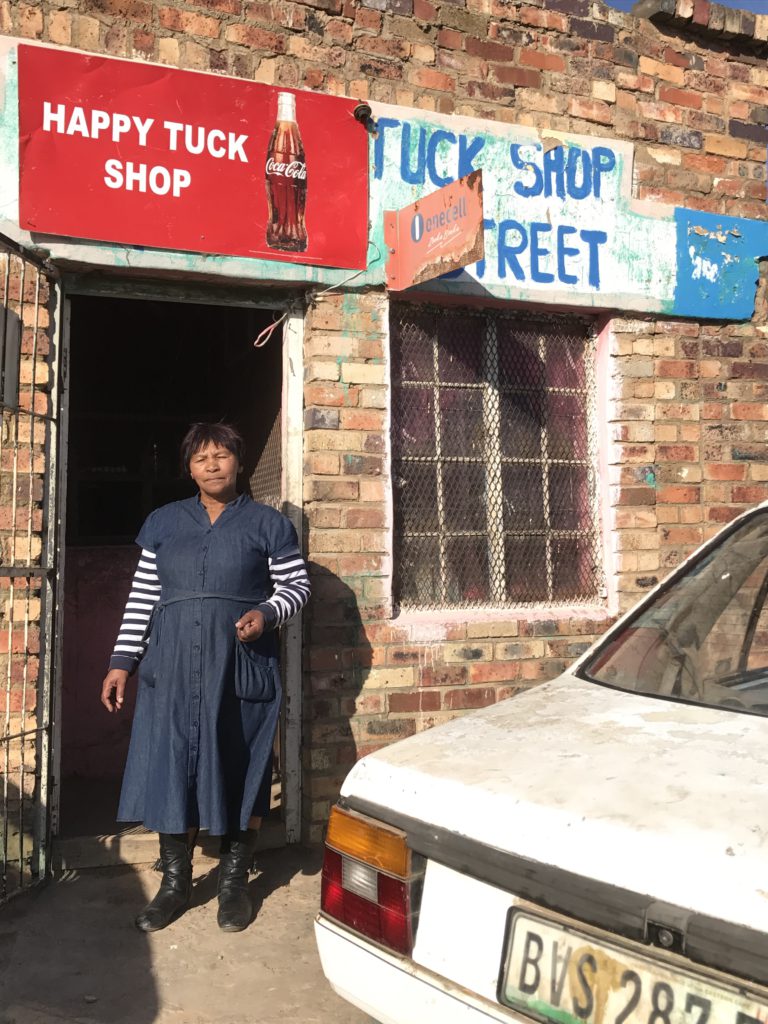 Naidene Mahapi is the owner of Happy Tuck Shop on Alfred Street in Joza, as well as a minister at the Methodist church. Photo by: Kathryn Cleary.

In Women’s Month, Kathryn Cleary hears the story of the 23 years a Grahamstown woman fought to escape horrific abuse.

“The sad part of my story is that people didn’t do anything. Even if you cry for help, nobody is going to help you.”

Naidene Mahapi stood up slowly from the shaded chair on the porch of her family’s home on Albert Street. She walked into the sunlight and squinted her eyes, looking off into the hills near Mary Waters High School. “You see those hills over there?”, she said pointing, “That’s where he beat me over the head with bricks.”

She begged him to stop for hours in the bush, crying and screaming in desperation, but he continued relentlessly. He phoned the ambulance when he finished and said nothing. Mahapi was barely alive.

Her hands shook as she lifted up her wig to reveal faint scars on her hairline. “The blood was streaming,” she said, her hands tracing the blood as if it still gushed down her body. “He nearly killed me… he nearly killed me,” she reiterated in between sobs.

The incident on the hill was in 1990. In 2008, Mahapi’s boyfriend, and father to her only daughter, was finally sentenced to prison.

Mahapi had spent 23 years as a prisoner of war in a violently abusive relationship. She recalls her first impressions of the ‘money-lender’, describing him as a “smooth talker”, “easy going” and “charming”. “Maybe he’s the right guy”, she said.

“But after one month, he showed his true colours.”

He wanted to marry her, but she knew from the beginning that it would be a poor decision. After a year, the money-lender’s mother encouraged Mahapi to move in with him in hope that their relationship would improve. This was not the case. When Mahapi moved in with the money-lender, she was trapped.

“He’d beat me, he’d swear at me, nobody tried to help because they were all afraid of him,” she said. One evening she was beaten so badly in their home that the money-lender’s brother phoned the police. His two brothers knew what had been happening, but just as the others, were too afraid to step-in. “He was above the law”. Mahapi stated that the police knew about his abusive behaviour, but failed to do anything because they had borrowed money from him.

When two policemen arrived at the home that night the money-lender attempted to beat them, scaring them away, and leaving Mahapi to suffer. “I felt like a prisoner,” she said. “How can you be a prisoner in your own home because of a man?”

Despite her efforts to escape, Mahapi continued to hit a dead end. In 2003, she finally received a letter from court in the post. Having found the letter, the money-lender beat her and forced her to eat the paper little by little, until it was gone. “You take that piece of paper, and you chew it bit by bit!” he commanded her. “Why are you doing these things to me!”, she pleaded. But never heard an answer.

Mahapi worked at Birch’s during those 23 years and preached at a local church. “I would cry at night. My pillow would be wet for all these wasted years with this man.” Clinging to her Christian faith, she prayed every night. “I can’t take it any longer,” she would say.

One evening, the money-lender dozed off and Mahapi made a run for it. She ran from the coloured location all the way to her family’s home on Albert Street, knowing that her life depended on it. Mahapi’s friend told her that she must have had angels protecting her that night, because he had gone looking for her with an axe. “I could have been dead today,” she said.

From the night she ran away in 2003, Mahapi lived in hiding with her family in Albert Street. For five years she was humiliated in court. Nobody seemed to understand why she had waited for so many years to come forward about her experience. In 2003, she went to Grocott’s Mail and had her story published. “I had no other choice!” she said. She had been silenced for too long.

“The magistrate saw it,” she said. “I had to go [to the paper]because you people couldn’t help me,” she told them. “The law!” she shook her head disgusted. “You study to do the right thing, but where were they when I needed them? They really failed me!”

It was only until after the man’s sentencing in 2008 that Mahapi finally felt free. “It was the calm after the storm,” she said, taking a deep breath and slowly releasing it. “I felt happy and safe, I’m a free person now.”

“I’m a free person now”, she repeated, wiping the tears from her eyes.

After the sentencing, Mahapi said, that the police would check on her frequently, making sure she was safe. It was as if they too felt that they could breathe, knowing the money-lender was gone. He was released on parole after serving less than eight years of his original 15 year sentence. He has not disturbed Mahapi, or her family, since his release.

“As a Christian, I can’t hate him,” she sighed. “I hate myself for allowing myself to be hurt like this.” “Thank God I’m still alive!”

Mahapi has been approached by other women in the community, trusting her to confide in their own stories of pain – stories that sound all too similar to that of her own. “I’m a much stronger person now,” she said. “The scars outside heal, but the scars inside take years to heal.”

“If I can inspire just one woman with my story, that’s all I want.”

Mahapi’s tuck shop will celebrate its one-year birthday next month. The shop is often busy with schoolchildren, coming to buy sweets and cigarettes, always greeted by her warm smile and friendly gaze. Though her friend only told her that angels were watching her the night she first ran away, it is clear that Mahapi’s angels are still with her.