NO JOBS, NO MONEY, BUT ADC OFFERS A GLIMMER OF HOPE 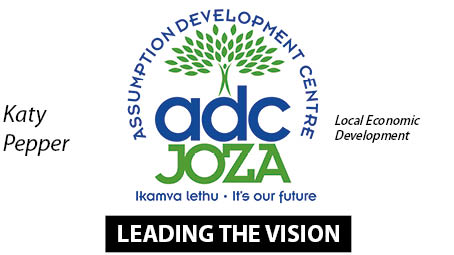 Young and old, women and men across the villages of Joza, Hlalani, Tantyi to Fingo Village, Scottsfarm, Sun City and Ghost Town cite unemployment as their number one challenge to having a future in Grahamstown. A job, they say, not only opens the gateway to having their basic needs fulfilled – food, water and shelter – but also education and fulfillment of their aspirations and those of their children.

This is the finding of the needs assessment recently conducted with 340 people accessing facilities at Assumption Development Centre (ADC), St Mary’s Development and Care Centre (SMDCC) in Joza and with students attending GADRA Education. The Needs Assessment, commissioned by ADC asked participants to identify the three most significant challenges they faced in terms of achieving a healthy, safe and fulfilled lifestyle in Grahamstown.

But these NGOs haven’t just let the findings of the Needs Assessment gather dust, they have commissioned a parallel study to look at how they can link the people of these areas to jobs with Grahamstown businesses.

Most of the participants in the needs assessment linked the challenge of unemployment with a general lack of money. One 30-year old woman from Joza remarked “I have no job. I have too many problems. I can do nothing”.  A 61-year old man from Extension 7 explained “people are starving because they can’t get jobs:”.

The lack of job opportunities for those not able to access a good education was expressed clearly by one young woman (19 years old) living in an RDP house “at times at home we stay the whole day and night without food. We need education so that we can take care of our families. We struggle to survive”.

This situation is further illustrated by looking at the reported income levels of participants. 5% live in households where none of the household members receive any income from employment nor do they receive any social grant and 20% of households exist on social grants alone. The majority of respondents living in households with an average of five members have a monthly household income of between R1 000-R2 000 with around a quarter of households receiving under R1 000 a month. According to the Eastern Cape Socio-Economic Consultative Council (ECSECC) poverty guidelines anyone living on or below R1 892 per month is living in poverty.

Other main challenges identified were crime and violence, drugs and alcohol abuse, limited access to and poor standard of education and pollution.

Participants indicated significant links between all these challenges: drug and alcohol abuse was linked to crime and violence; a lack of money from having no job often meant a never-ending circle of limited access to quality education, resulting in no educational qualifications to apply for jobs.

Three 19-year old women explained how “people are unemployed and desperate”; “a lot of people, especially the young are not working so the easiest way to get money for food is to do crime”; “we feel unsafe in our houses”.

Links to drugs and crime were made: “it’s the drug abuse that cause robbery. People who do drugs need money to pay for them. They don’t have jobs, they get violent”.

Many felt the police were never around and if drug abusers or sellers were caught they often avoided conviction and even if they were convicted the sentences were not harsh enough to act as a deterrent.

The Municipality was strongly criticised for the lack of community services and facilities for communities in these areas. Many respondents cited the Municipality’s lack of care for their environment – the rubbish left uncollected for months on end, the lack of water clean water, electricity and the poor quality of housing.

Overall, the needs assessment report describes the extreme levels of poverty experienced by many living in close proximity to the Grahamstown city. And often in Grahamstown it is the NGOs who pick up the slack for Municipality inadequacies and the lack of job opportunities.

So, it isn’t surprising that these three NGOs, ADC, SMDCC and GADRA Education commissioned a parallel survey of businesses in Grahamstown with a view to finding out what opportunities there are for people in these communities to get jobs and how they can access those opportunities.

In this survey of (‘Entry Level Jobs within Makana in 2017), the idea was to see if there was a match between what the needs assessment participants identified as a need and what businesses required in terms of entry level jobs.

The 29 businesses who participated in the survey ranged from services including funeral services, rental agencies and security services, to production companies such as mining companies, the hospitality industry, health facilities such as optometrists and health and fitness centres and to educational institutions such as schools and the university. .

Significantly, the survey reports that most of these businesses except for the NGOs tend to recruit staff by “putting the word out through their current staff or asking other business associates”. The more usual routes such as advertising in newspapers or using recruitment agencies were not so often used.

For many of the businesses looking for staff, it wasn’t necessarily specific skills they were looking for so much as the right attitude, enthusiasm and the commitment to learn. As one business stated we need “highly motivated and driven individuals. Skills we can usually train”.

Although a limited number of these businesses reported needing staff now, most of them (26 businesses) indicated that they would be requiring staff in the future mostly in administration support, but also customer services and unskilled staff for physical labour work.

So how to link the two parties together – Grahamstown businesses need for entry level employees and the large numbers of unemployed people in the communities on the periphery of the city?

The survey specifically asked businesses would they consider having interns?  20 businesses said they would. The internships they offered would be from 12 months in some cases down to three months in others. It was often the smaller businesses who showed more interest in taking interns.

The needs assessment has shown just how difficult and desperate the situation is for communities in the Joza, Dlalanti, Tantyi, Fingo Village, Scottsfarm, Sun City and Ghost Town areas. The business survey has shown the beginnings of an opportunity, a glimmer of hope for at least some of the people in these communities. It is a step in the right direction. For these NGOs it is the beginning of a large exercise in addressing the needs of both these parties, of bringing them together to improve the lives and livelihoods of many in Grahamstown.

Katy Pepper conducted the Needs Assessment and analysis of the Business Study. She is currently the Programme Advisor for the Ubunye Foundation.