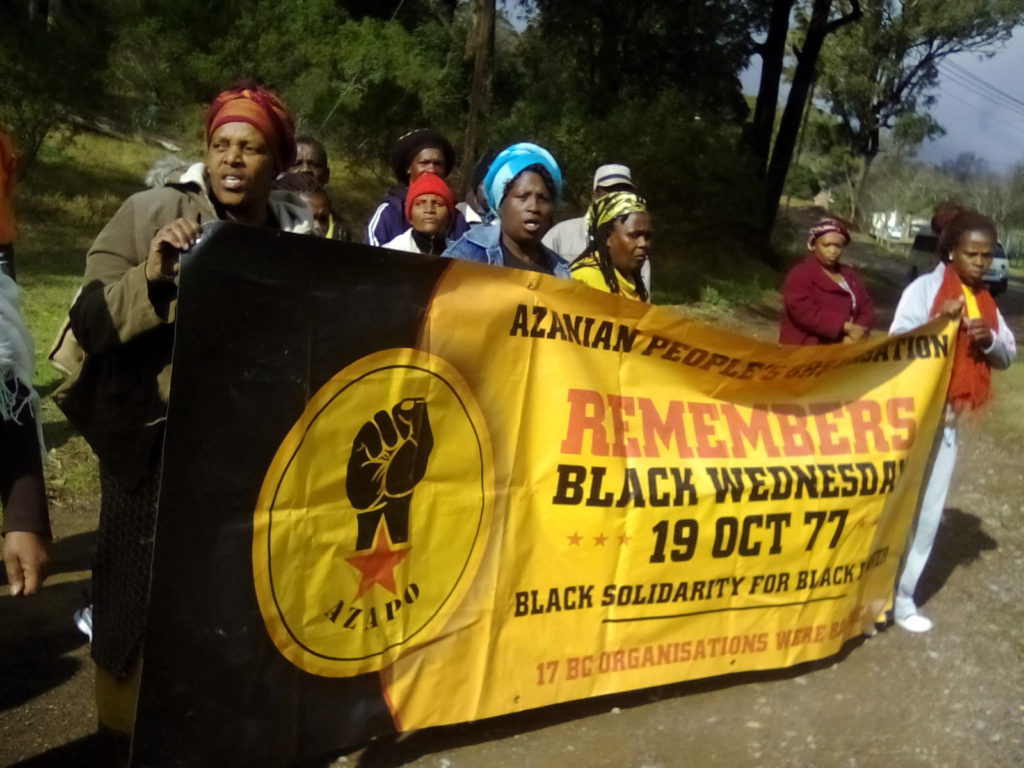 Imbeleko women at the event which was held to remember Steve Biko. Photo Lindani Donyeli

On 18 August 1977 Steve Biko, founder of the Black Conscious Movement in South Africa, was arrested outside Grahamstown. Participants in a 40-year-anniversary commemoration in Grahamstown last week announced a campaign to have Beaufort Street renamed in his honour.

At the forefront of the commemoration was Imbeleko, the organisation’s women’s wing, and the theme of Women’s Month.

Biko died less than a month after his arrest, from injuries inflicted by his security police interrogators, and Imbeleko Provincial Chairperson Nosgqibo Soxujwa used the occasion to speak about one of their members who was killed by her partner earlier this month.

“Phantsi nokuhlukunyezwa ko Mama (down with the abuse of women),” Soxujwa said. “We are saying that women abusers should be arrested.”

“Its been 40 years since the death of Stephen Bantu Biko and in commemoration of him we want this road to have his name,” said Soxujwa.

Winkey Magqibisa, of Imbeleko’s national health desk, said they were here to prolong the spirit of the late activist who sacrificed his life for South Africans. “This is BC (Black Consciousness) Week where the ideology of Stephen Bantu Biko is remembered and celebrated,” Magqibisa said.

Azapo  Provincial Chairperson Zamile Hector Sinuka said three years from now would mark 200 years of exploitation of the black people of South Africa by colonisers in their own land. He said the current government served white imperialists. “Our struggle is for total emancipation  of black people and the redistribution of land, equally this time,” Sinuka said.

Azapo President Strike Thokoene said they would continue to walk in Biko’s footsteps and would campaign for Beaufort Street to be renamed in his honour. Makana Mayor Nomhle Gaga said the campaign to have the town’s name changed would also carry more weight with the support of Azapo.

“The rainy weather is a sign of luck that this will be successful: there has been drought in Makana, but today they brought rain with them,” Gaga said last Friday.