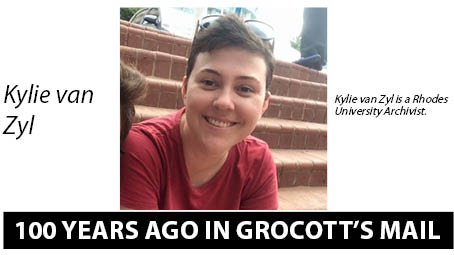 August 1909 fell squarely in the middle of one of the Indian Ocean’s greatest mysteries. The SS Waratah, a passenger and cargo steamer en route from Australia to London, disappeared late in July – and has never been seen again.

The ship had left Adelaide, Australia, on 1 July, captained by John Illbery, and docked in Durban on 24 July. The Waratah was supposed to be a safe ship: it had lifeboats for 941 people, could carry enough food for a year at sea, and had an onboard desalination plant that could produce 25 000 litres of fresh water a day. What it did not have was a radio – the Waratah, like many ships at the time, communicated using Morse code.

Some people, however, thought the ship was too top-heavy to be safe. At least one passenger, an engineer by the name of Claude Sawyer, refused to continue on to London in what he saw as an unstable  vessel. He decided to disembark at Durban – and this ended up saving his life.

Early on the morning of 27 July, the Clan McIntyre, headed for Durban, passed the Waratah somewhere near the mouth of the Mbashe River, 209km southeast of Durban. The weather was worsening; by the end of the day, winds of up to 90km/h and nine-metre swells were reported. That evening, the Guelph, also headed for Durban, sighted a ship, but was not sure it was the Waratah because of the poor visibility and bad weather. Later that night, the Harlow, another ship headed up the coast, thought it saw the Waratah following it 333km from Durban. This sighting is odd – for the Waratah to be there, it would have had to have abandoned its course for Cape Town and turned back.

That was the last anyone ever saw of the Waratah.

Vessels arriving in Cape Town in the weeks after 26 July reported heavy swells and bad weather along the coast between Durban and Cape Town. A supposed sighting of bodies washing ashore at the Mbashe River mouth turned out to be false, and no wreckage that washed ashore was definitively identified as belonging to the Waratah. Many ships searched for the vessel, but none of them found anything, and some were damaged by the high seas. The search went on for weeks; newspapers in England, South Africa and Australia reported on the search almost daily.

On 4 August, Grocott’s speculated that an explosion had sunk the Waratah, but dismissed the possibility that it had gone down: “That a modern vessel of 10 000 tons, fitted with all the latest lifesaving apparatus, watertight compartments and double bottoms should come to grief well off the coast and leave absolutely no trace of herself seems incomprehensible.”

By the end of the month, hope had faded. Grocott’s of 25 August 1909 reported: “The Waratah is now 28 days overdue from Durban, and the question that is being asked is, assuming her to be still afloat, what are her chances of being picked up? As to her being afloat, Captain Bates of Cape Town … who sailed for some years as chief officer with Captain Illbery … is very confident; in fact has no doubt whatsoever that the Waratah is still above water. The official search having been abandoned, the Waratah is left to take the chances of being picked up or patched up sufficiently to steam ahead on her own account … As to where the steamer may have drifted no one can more than guess. It may be south to Tristan da Cunha or Kerguellen, or north towards Mauritius, or anywhere between these points.”

Sadly, the Waratah had most probably sunk somewhere along the Wild Coast. The area is dangerous to ships even today. The Agulhas Current travels southeast down the coast at about 10km/h. If the wind blows from the southeast against the current, it results in steep waves, close together and with a deep trough between them. Nine-metre swells are common, and 14-metre swells are not unheard of. Ships heading to Durban hug the coastline to avoid sailing against the treacherous current, while ships heading down to Cape Town sail further out, with the current.

The night that the Waratah was last seen, the wind was coming out of the southeast, and the ship would have been sailing with the current. This would have made the vessel vulnerable to big waves. If the Waratah was top-heavy, it is likely that a large wave could have capsized it, or crushed the hull and sunk it almost instantly. Another possibility is that a wave broke the ship’s rudder, and it drifted towards Antarctica with no way of steering or signalling for help.

But because nobody has ever found the wreck, we can’t be sure.