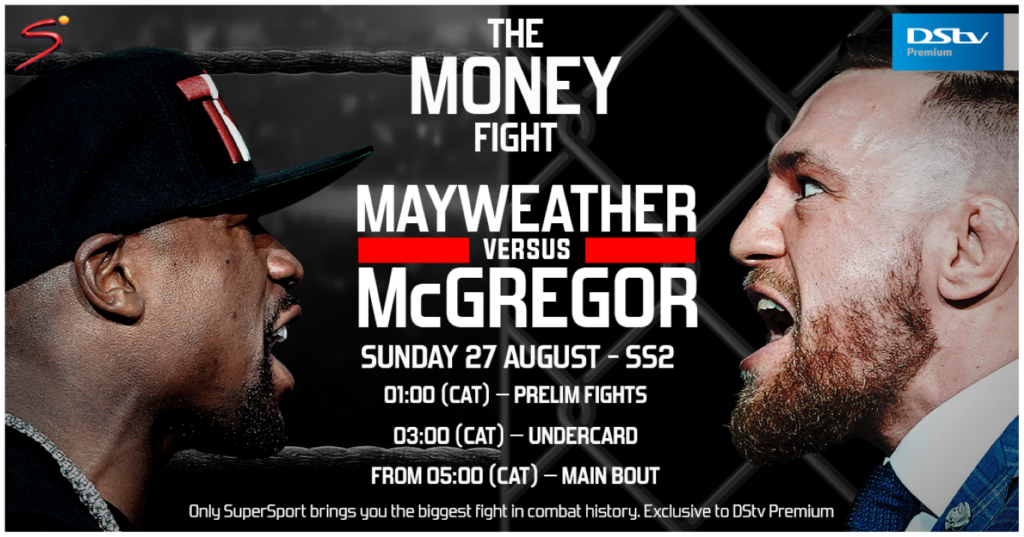 It is all about the money this weekend and the hype is sure to be cranked up to full volume before Floyd Mayweather and Conor McGregor step into the ring in Las Vegas on Saturday night (Sunday morning SA time).

Boxing has a way of throwing up these unique occasions – anyone remember Muhammad Ali trying to take on a wrestler? – and America’s gambling capital will be the perfect venue for one of the most discussed bouts in recent history.

Both fighters have not missed the opportunity to add to the hype, but as they love to say in boxing: “Now it’s time to walk the walk.”

Even non-boxing fans might be up early on Sunday morning (SS2, 5.30am) to see how it all unfolds. The preliminaries get under way on SS2 at 1am.

Notwithstanding their impressive showing at the Nelson Mandela Stadium, the Springboks know that nothing has been achieved yet as they continue their Rugby Championship journey in Salta, Argentina on Saturday (SS1, 8.30pm).

Well beaten last week, the Argentines will come back firing and it will take another massive effort for the Boks to continue their unbeaten run this year.

Australia face even more question marks after the shambles of last weekend’s first half performance against New Zealand. Whether coach Michael Cheika can shake them out of their torpor will be revealed on Saturday in the return clash (SS2, 9am).

Four South African soccer clubs will be hoping to close in on the first silverware of the season when the MTN8 semifinals are played this weekend.

SuperSport United kick it all off against Maritzburg United on Saturday (SS4, 7.30pm), while Cape Town City host Wits on Sunday (SS4, 3pm).

Finally, the Formula One returns to action in Belgium on Sunday (SS6, 12.30pm).