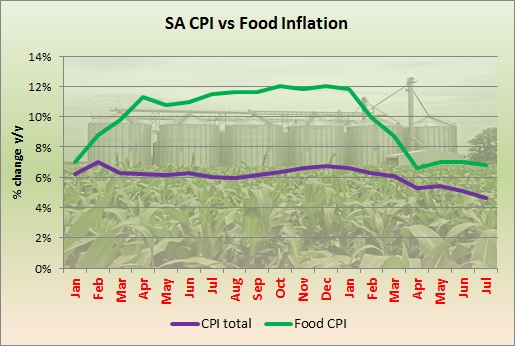 Easing consumer inflation in July boosted real, in other words after the effects of inflation have been taken out, disposable income to the strongest gain since August 2015. Consumer inflation eased to 4.6% year-on-year (y/y) in July from 5.1% y/y in June and 5.4% y/y in May. Over the same period the real BankServe Disposable Salary Index (BDSI) compiled by economists.co.za grew from 0.9% y/y in May to 1.3% y/y in June and 2.5% y/y in July. The July 2017 y/y increase was the largest since August 2015, when it was 3.8% y/y. As household consumption expenditure accounts for some 60% of total economic activity or gross domestic product (GDP), this means that the economy entered the third quarter with positive momentum. Some economists are worried that after a strong second quarter we would have a weak third quarter, but that worry seems to be unfounded. Business executives are in fact more positive about the third quarter than the second quarter with the experts surveyed by the IFO Institute of Munich University more positive about the future of the South African economy after a collapse in the second quarter due to the ratings downgrade in April.

This is also reflected in the South African Chamber of Commerce and Industry Trade Activity Index which grew for the fourth consecutive month in July and is now back above the breakeven 50 level. The inventory sub-index mirrors this optimism and grew to 51 in July from 43 in June, as executives had reduced stock levels in May and June in case there was a sharp correction after the ratings downgrade.