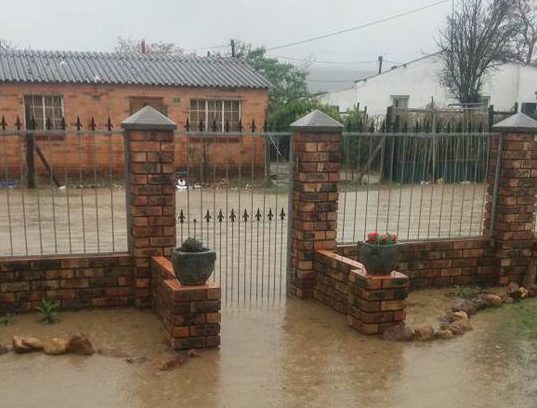 When Thursday’s floods reached Karen Massey’s doorstep, she called her daughter in desperation. ‘needing assistance in Calvert Street, cant get hold of anyone at the municipality. water nearly inside our house,’ her daughter Roxanne Frans wrote in a message via Grocott’s Mail’s Facebook page in desperation at 12.22pm.

She also put out the call on the Grahamstown Facebook page, where she got a lot of commiseration and sympathy. But the help came, according to councillor for the area Brian Fargher, from Makana’s Fire and Emergency Services staff who unblocked a stormwater drain choked with rubbish.

At 12.47pm he messaged in reply to Grocott’s Mail’s query, ‘The Fire Dept and Disaster Management are there, responding to the multiple calls I received from residents. I called all the departments in and have been on site for some time.’ Massey said afterwards, ‘It happens every time when it rains. It’s a problem because they don’t clean the drains. There’s always rubbish on the corner and the drain gets blocked.’

By around 2pm on Thursday, one of Grocott’s Mail’s rainwatchers (see page 4) had reported measuring close to 50mm of rain and several roads and yards in low-lying areas were flooded.

Previous ArticleThe SRC’s women ready to lead from the front
Next Article Dogma, destiny and three steps to state capture