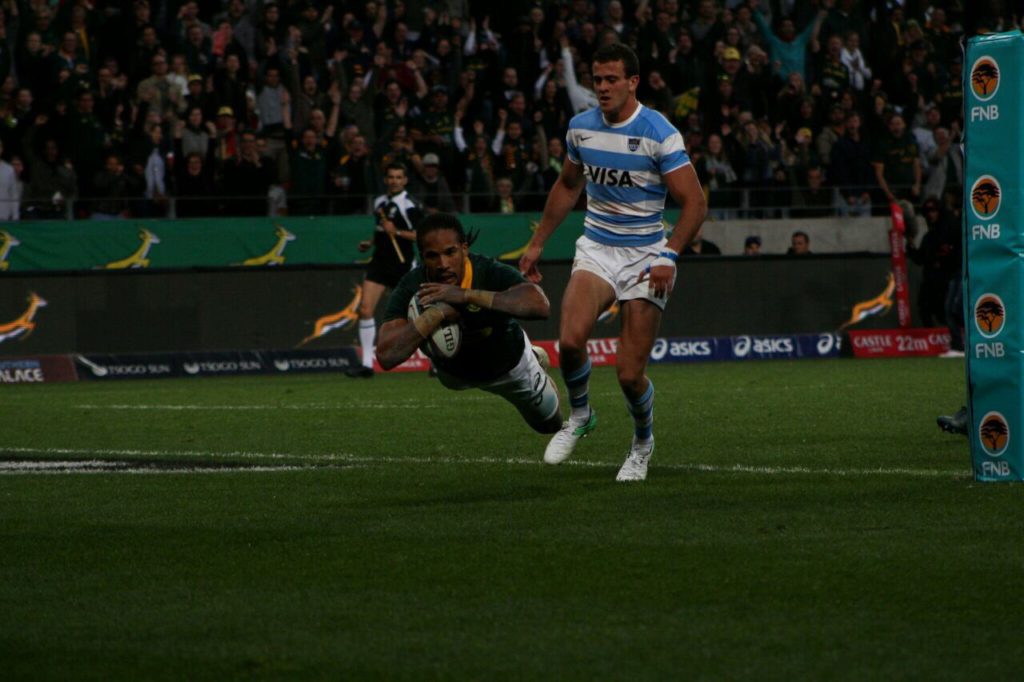 Courtnall Skosan dives over the line for the Springboks in their 37-15 win over Argentina on Saturday 19 August. Photo: James Fowler

The opening round of the 2017 Castle Lager Rugby Championship got underway on Saturday 19 August, as South Africa took on Argentina in Nelson Mandela Bay stadium. The match kicked off in good mid-August late afternoon conditions, with the windy city living up to its name.

Earlier in the day, New Zealand had already taken on Australia in Sydney at the ANZ Stadium, where the All Blacks proved why they are still world no. 1 by dispatching the Wallabies by 34-54, despite a second half comeback from the hosts. South Africa were looking to emulate their Kiwi counterparts in what would prove to be an exciting encounter against Los Pumas.

Both teams were feeling each other out in the early stages of the match. The Springboks looked hungry on attack from the onset, however the Argentinian defence was up to the challenge. Elton Jantjies missed an early attempt at a drop goal from the 30m out, indicating the pressure that Los Pumas’ defence placed on the host’s attacking line.

Jantjies had an opportunity to rectify his missed drop goal moments later, however, as South Africa was given a penalty on the Argentinian 10m line. Jantjies made no mistake this time, and the hosts went out to a 3-0 lead after 10 minutes. The South Africans dominated the ruck area early on, winning several penalties at the breakdown within the opening 15 minutes.

The hosts were denied the opening try of the match after the ball was adjudged to have gone forward off of a South African hand in the lead up. The Argentinian defence began to crack mid-way through the first half, however, as they gave a way a couple of offside penalties. Elton Jantjies lined up one such penalty on the stroke of the 20th minute, converting the three points and taking South Africa to a 6-0 lead over Los Pumas.

Argentina got the opportunity to hit back with a penalty of their own seven minutes later. Nicolas Sanchez lined up the penalty from the touchline in South Africa’s half, however he missed the kick out to the right of the posts, and the scores remained the same.

The visitors scored the first try of the match shortly after, however, when they turned defence into attack to run in a 60m try. Jan Serfontein tried a grubber kick through the Argentine defence, which was fielded by Joaquin Tucalet, who broke through, ultimate putting Martin Landajo over in the corner. Sanchez missed his second kick of the match, and the Springboks held on to a 6-5 lead.

With four minutes left in the first half, Courtnall Skosan ran in a brilliant solo try. He showed great appreciation of the laws as he broke the line, was tackled and recycled the ball legally before running another 20m to score under the posts. Jantjies kept his perfect kicking record for the day, as he slotted the simple conversion. The hosts went into halftime with a 13-5 lead over Argentina.

Argentina kicked off the second half with a penalty through Sanchez in the 45th minute. Sanchez lined up the penalty, which was awarded for offsides by the hosts, from the South African 10m line and converted his first kick out of three. Moments later, however, Jantjies lined up an almost identical kick and slotted it through the uprights to maintain their halftime lead. The Springboks led the Argentinians by 16-8 after 47 minutes.

South Africa soon switched into attacking mode as they turned down two relatively simple penalty attempts at goal in favour of attacking lineouts. Their bravery was rewarded moments later, when Raymond Rhule burst through the line to dive over and score for the home side. Jantjies showed his consistent kicking form yet again with another successful kick, despite the ball striking the upright on its way over. The Springboks thus extended their lead to 23-8 over Los Pumas.

Los Pumas fought hard to respond as they built up solid attacking possession inside the South African 22m. After several phases, the visitors managed to get the ball out to Emiliano Boffelli on the wing, who crossed over in the corner. Sanchez added the extras from out wide, drawing closer to the home side, who now led by 23-15.

The home side responded with another try to their tally as some solid hands and good support running allowed Siya Kolisi to run in untouched for the Springboks’ third try. Jantjies continued his perfect form from the tee with another simple conversion, taking South Africa out to a 30-15 lead.

South Africa continued to back their attack, as they controlled the ball inside the Argentinian 22m. The Springboks extended their lead after Pieter-Steph du Toit crashed over the line from 2m out. Jantjies slotted yet another conversion to bring the lead out to 37-15 over the visitors with just seven minutes left in the match.

As the final hooter sounded, Los Pumas attempted to attack from just inside their own half. The Springbok defence, however, kept the pressure up, resulting in the visitors knocking the ball on and the referee blowing the final whistle. The Springboks continued their unbeaten run in 2017 with an opening 37-15 win against Argentina.