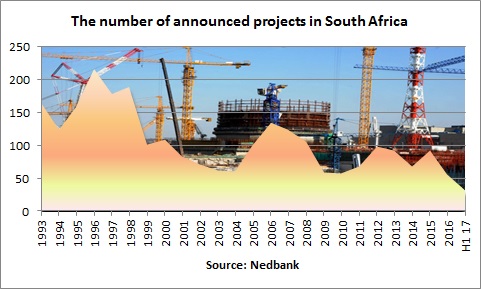 The drop in announced large capital expenditure projects to 32 in the first half of 2017 from 44 in the first half 2016 and 46 in the same period in 2015 showed the impact of last year’s economic headwinds and political uncertainty this year. This policy uncertainty was caused in part by having three Finance Ministers in four days in December 2015 and a further change in Finance Ministers in March this year.

Nedbank has been conducting the research since 1993 with the help of Engineering News and the annual project value record was set in 2006 at R1.1 trillion in constant 2017 rand.

The number of project announcements fell to 57 in 2016 from 92 in 2015 and remained well below the record 217 announced in 1996 when optimism about a New South Africa and a Season of Hope was high.

Nedbank said all the three sectors (private, government and state-owned enterprises) recorded declines in the value and number of projects announced in the first half of the year. Consequently the outlook for fixed-investment spending remains poor and Nedbank expect gross fixed capital formation to contract by 0.6% in 2017 as weak confidence, the deteriorating political environment, depressed consumer spending as well as policy uncertainty in the mining sector, will hamper investment spending by the private sector.

In February 2017 the Treasury was more optimistic and forecast a 1.5% rise in 2017 after a 3.9% decline in 2016, but that was before Pravin Gordhan was fired in late March this year and the ratings agencies downgraded South Africa’s credit rating to junk status.

Professor Alan Hirsch, the Director of the Graduate School of Development Policy at the University of Cape Town said the drop in the project announcement in the first half this year was bad news.

“It is very disturbing that investment plans are declining in value and number so sharply. The public sector is constrained due to belt-tightening due to balance sheet issues for the state and the state-owned enterprises (SOEs). Borrowing has gone too high for comfort, and tax revenue is low due to very slow growth. The private sector isn’t fund-constrained, but seems reluctant to invest because of the huge policy and political uncertainties which South Africa is currently plagued with. The decline in investment will be very damaging for short and long term growth and development, and it will worsen poverty and unemployment,” he said.

Dawie Roodt, the chief economist at Efficient Group said the drop in state or SOE’s capital spending is probably directly linked to the dismal state of their balance sheets, while the drop in private spending is likely to be due to uncertainty related to politics and hence policy.

“This is likely to prevail until a change in the political leadership and a better outlook for economic performance,” he said.

Mike Schussler, the chief economist at economists.co.za said there would only be an improvement once business confidence improved.

“This is further proof that the decline in growth in the economy is going to have a longer term impact. Confidence will be key to having this turn around,” he said.

This view was echoed by Colen Garrow, the chief economist at Meganomics, who pointed out the knock-on effect on construction jobs.

“The construction sector isn’t performing well, hardly surprising considering the multi-year lows South Africa is generally experiencing in major confidence indices. There will be timing differences between building plans passed and building plans completed, with the former literally awaiting better economic conditions before committing to physical buildings. The rule of thumb for construction’s value added contribution to the economy is significant – for every job in the construction sector, it has an impact on some four other jobs which are created in the broader economy. Another significant statistic is that fixed investment by the private sector can – and often does – amount to four times the combined fixed investment spend by general government and the SOEs,” he said.

Statistics South Africa reported that 110,000 construction jobs had been lost in the second quarter compared with the first quarter according to the Quarterly Labour Force Survey.