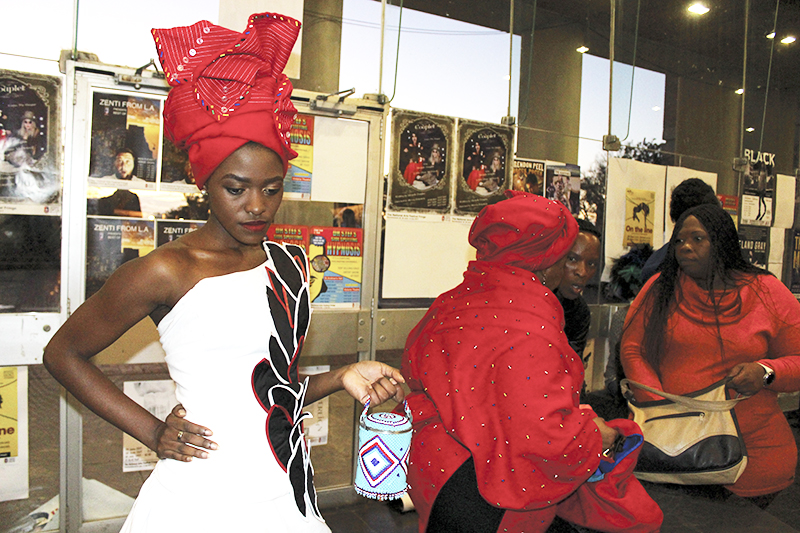 The Eastern Cape Fashion Showcase at the opening of the 2017 National Arts Festival. Is this one of the outfits we might see at a masked ball in Church Square in a re-imagined event? Photo: Sue Maclennan

All of these ideas were brought forward by a group of Grahamstown residents and businesspeople at a gathering this week. This year’s National Arts Festival left some complaining it had left them uninspired. However, one particularly enthusiastic resident, Michael Wynne took this feeling and turned it into an exciting opportunity.

“We are re-imagining and glamorising fest,” Wynne explained. “There’s no limit.”

Wynne organised the Creative Workshop in the orchestra room at Victoria Girls’ Primary School as a means for residents to work together in brainstorming their own version of Festival. After a Facebook post of Wynne’s attracted the attention of National Arts Festival CEO, Tony Lankester, the sky was the limit.

“I suggested to him that he convenes a ‘dream big’ session and prepare a presentation that they can bring to the Festival to discuss”, Lankester said.

At the workshop, participants were all smiles at the suggested ideas.

Imagine a Festival that started off with a masquerade ball on Church Square, the Cathedral bells striking midnight, resounding cheers and hurried footsteps leading the way for a night of dancing and conversation. Or perhaps a Festival that hosted events like fashion week, battle of the DJs, and tours of local heritage sites. “There’s no limit!”, Wynne exclaimed. “This is the first time local businesses and residents have been involved,” said Wendy Eichhoff of Campus Concepts.

With Grahamstown struggling through an economic recession, the Festival needs to be profitable for both locals and visitors. The goal for re-imagining Festival was to create multiple outlets for maximum enjoyment for those attending.

“There are things you can organise that don’t require money,” said resident Niran Awoyemi. Brainstorming ideas from extravagant to simple, the workshop gave a snapshot of what could be to come for the Creative City.

With a new vibrancy, participants believed, Grahamstown’s Festival could reveal itself in ways like never before.

“We are delighted at any initiative that seeks to enhance the Festival offering,” said Lankester. “The Festival is not just a national treasure, but an important part of the cultural and economic life of our city. We would love for all residents of Grahamstown to embrace the Festival and the opportunities it presents, and look forward to hearing some of the ideas tabled.”

“There’s no reason we can’t do it, the catch is that we have to work together,” Wynne said. The idea of a masquerade ball hints towards a theme of ‘unmasking Grahamstown’. Wynne will collate the ideas generated by the workshop, which will also be added to before being presented to the National Arts Festival Committee at a later date.

Previous ArticleCalling all street performers… the search is on!
Next Article Good Friends bring smiles to Ethembeni