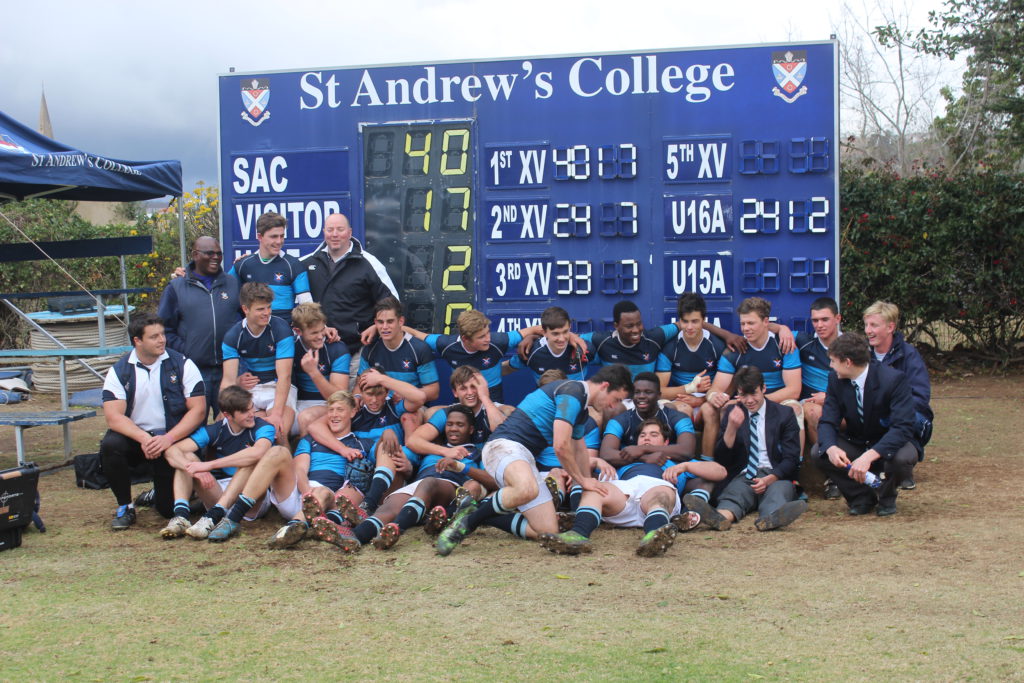 St. Andrew's 1st X
St. Andrew’s College finished off a superb rugby season on a high note as their 1st XV trounced Dale College 40-17 in Saturday’s Lower Field finale. Matt More, who has shone throughout the year, starred with a hat-trick.
The hosts flew straight out of the blocks in the opening minutes as Jack Allanson scored the opening try of the game, which Murray Koster failed to convert. Shortly afterwards, More ran from deep inside his own half to extend the early lead. This time, Koster’s conversion was good.
Dale hit back with an unconverted try of their own, but Sean Varty then scored the hosts’ third try to take them into half-time 17-5 ahead.
Dale got the second half off to a great start, bringing the margin down to five points with a converted try. However, from then on, it was mostly one-way traffic.
More’s seemingly unstoppable runs proved too much for the Dale defence to handle as he scored two quickfire tries to take the score to 27-12.
Although Dale did hit back with a try, that proved to be nothing more than consolation. Koster extended the lead from a penalty before Carl Johnson put the game to bed with two late unconverted tries.

St. Andrew’s First Team Coach and Director of Rugby Andy Royle was in good spirits after the game. He said: “To be fair, we weren’t expecting a result like that, but we’ve got confidence in the boys to play well and they did play well.”

The St. Andrew’s first XV has only lost two games all season, leaving the class of 2018 with big shoes to fill. Royle, however, insisted that he was not worried about the future despite the lofty standards his side this year set. “The second team is built mostly on a platform of Grade 11s, so we’re looking forward to promoting them,” he said. “There are a couple of juniors that have played. There are 16 Grade 11s who have got caps this year. We’re looking forward to 2018 and we are excited for it. We’re just enjoying the moment.”
For the matrics playing their last games for St. Andrew’s, there could hardly have been a better send off than the one they received on Saturday. In a season that saw many spectacular performances on Lower Field, the 1st XV may arguably have saved the very best for last.
Previous ArticleCurrie Cup to trial new laws
Next Article My Say – Super Rugby team of the Tournament