Young piano duo to touch down in Gtown 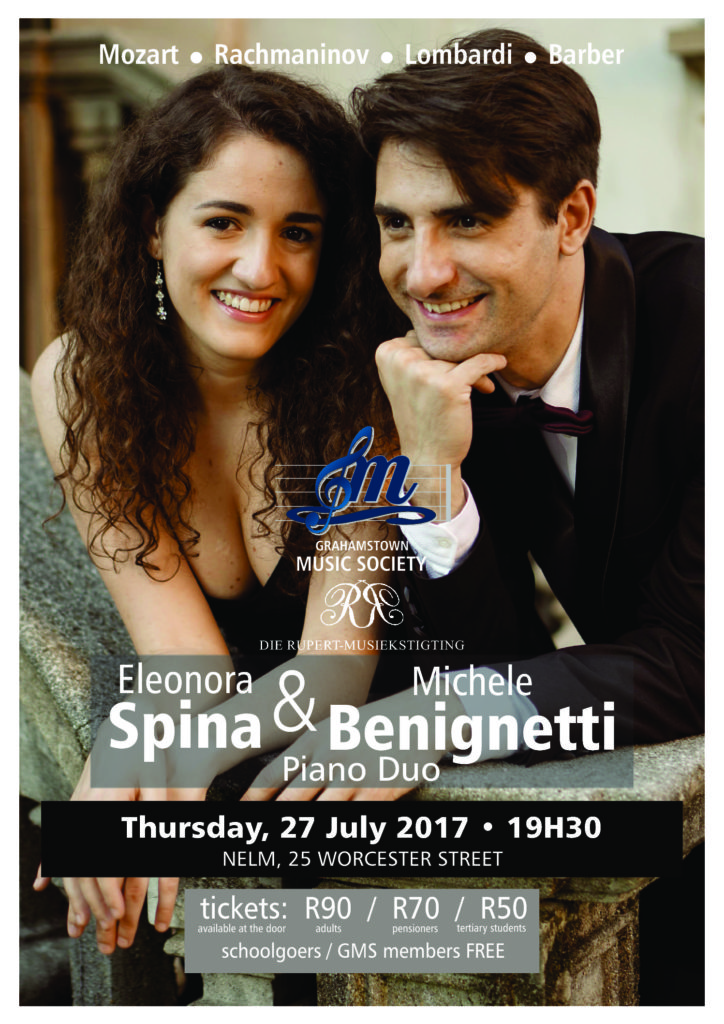 Eleonora Spina and Michele Benignetti, who have achieved great distinction as soloists, chamber musicians and teachers, and as a piano duo since 2013, will perform on Thursday July 27 at 19.30, NELM, 25 Worcester Street.

Eleonora Spina and Michele Benignetti are two compelling, talented young musicians that come from strong and varied back­grounds as soloist and chamber musicians.

Their acclaimed recording of Brahms’s com­plete works for two pianos for Brilliant Classics Records (2015) has been praised by audiences and critics alike: the most popular classical mu­sic magazines in Italy and France (Amadeus, Musica, Suonare News, Le Pianiste…) awarded this recording with the highest rating in 2015. The Italian critic Luca Segalla says: “…Eleono­ra Spina and Michele Benignetti, with utmost care and attention to sound, precisely execu­te the contrapuntal game of variation no. 4, carving out a finale which makes one feel as if he’s listening to an orchestra…” (Luca Segal­la for “Musica” Magazine, September 2015). The latest album, “Lifetime” on the Sheva Collection’s label has been released in January 2017.

Both musicians graduated from some of the most important European music institutions such as the Ecole Normale de Musique “A. Cor­tot” in Paris, Codarts University of Performing Arts in Rotterdam, Hochschule fur Musik in Graz, the Conservatory of Music “G. B. Martini” in Bo­logna, and the Conservatory of Music “G. Can­telli” in Novara. They are also prize-winners in solo competitions including 2014 Yamaha Mu­sic Foundation Competition and 2007 Scriabin International Piano Competition in Paris.

Their musical education has been marked by studies with renowned Professors including Enrico Pace, Chantal De Buchy, Aquiles Del­le Vigne, Franco Scala, Roberto Plano, Nel­son Delle Vigne – Fabbri and Walter Bozzia. Their interpretation has been influenced by many masterclasses that they have attended in Europe such as Royal College of Music in London, with Stefanina Passamonte, Roustem Saitkoulov, Hiro Takenouchi and Jan Loeffler; Conservatory of Music “G. Cantelli” of Novara, with Professor Alberto Miodini and Internatio­nal Academy and Festival “March Music Days” in Ruse, Bulgaria with Genova & Dimitrov Piano Duo.

In the coming concert seasons Michele and Eleonora are invited for a tournée in South Africa; they’ll also participate in the renowned concert series “Jeunes Talents” in Paris, and in many fe­stivals both as soloists and chamber musicians playing a sparkling repertoire ranging from Schubert Piano Quintet to Bartok’s Sonata for Two Pianos and Percussion. In Italy they’ll per­form for the Società dei Concerti in Milan and the Ravello Concert Society, just to name a few.

Michele and Eleonora are currently studying at the Hochshule fur Musik in Graz under the gui­dance of Professors Gil Garburg and Sivan Silver.

Live music at the Pothole and Donkey.