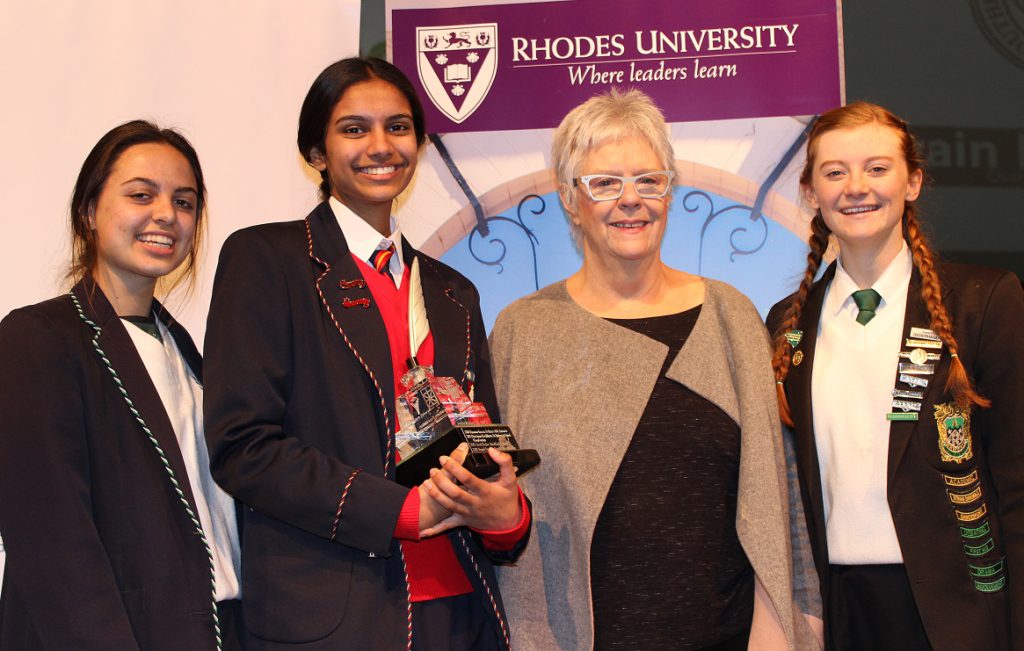 Grahamstown schoolgirl Emily Fryer was among the top 100 entrants in the De Beers English Olympiad announced this week.
The Grahamstown Foundation and the South African Council for English Education (SACEE) announced the rank order of the Home Language Exam and the Top 15 First Additional Language Exam winners at an official prize giving ceremony held in Grahamstown on Wednesday 12 July 2017.

The winner was Shraya Moodley, who attends Epworth School in Pietermaritzburg. Her supportive family drove from Pietermaritzburg to join her in Grahamstown for their shared proud moment. Photo: Steven Lang

Second was Sarah Martinson, of Roedean School in Johannesburg and third was Abigail Sieberhagen, of Pearson High School in Port Elizabeth. Emily Fryer, a Kingswood College pupil, was placed 29th.

The English Olympiad is an annual English competition that drew 7832 candidates from 383 national and international schools in 2017. These included schools from throughout South Africa in addition to schools in Lesotho, Namibia and Botswana.

This prestigious competition has run since 1976 and is organised jointly by the Grahamstown Foundation and SACEE. It has been sponsored by De Beers since 1985.
Entrants from Grade 10 to 12 wrote the three-hour examination on 7 March.  Of the 7832 entrants, 5379 wrote the Home Language paper, and 970 wrote the First Additional Language paper.
The theme of the anthology studied for the examination this year was, ‘Then and Now’. The anthology, compiled by SACEE and entitled, Staying Alive, consisted of poetry, prose, plays and short stories by South African writers whose early works were published in English Alive, which, in 2017, celebrates its 50th year publishing the writing of young South Africans.

The anthology explored some of the early works by these writers alongside some of their later writing.

The competition also focuses on assisting and enriching learners from communities where De Beers operates through the Olympiad English Development Initiative (EDI). This year, 531 learners from 12 EDI schools entered the Olympiad.

Phillip Barton, CEO of DBCM, the long- term supporter of the English Olympiad stated: “It is inspiring and remarkable to see the numbers of participants in the EDI programme increasing every year. In partnership with the Kimberley based Maths and Science Leadership Academy, EDI is an expansive and inclusive component of the Olympiad, practically helping learners in schools in the mining communities associated with De Beers enjoy the benefits of the Olympiad and increasing confidence in the use of English in these communities. Importantly this support is also adding some fun by providing an opportunity for learners to compete at a national level.”

He added, “On behalf of De Beers, I wish to congratulate Grade 12 learner, Thembeka Mzimba, from the Maths and Science Leadership Academy in Kimberley who made it into the Top 100 of the Home Language examination out of 5379 learners that wrote the examination. We are also proud of the five candidates from the Maths and Science Leadership Academy and Dendron High
School, who made it to the Top 15 of the First Additional Language examination, which was written by 970 candidates countrywide.”

Chief Examiner, Maxine Ward-Cox, said she was highly impressed by the candidate’s ability to grasp the issues and produce thought proving answers: “The questions were fairly demanding and required a thorough knowledge of the texts and an awareness of the issues raised by the authors. Candidates showed an ability to grasp these issues, and express their opinions in wellstructured
and focused answers. Most answers were original and thought-provoking”.

Prizes awarded are as follows:
a. The Top 3 candidates received R33 000, R30 000 and R27 000 respectively.
b. The Top 15 candidates are invited to attend the Grade 12 National Schools Festival in Grahamstown. Their participation is sponsored by De Beers English Olympiad. The English Olympiad prize-giving ceremony is held during this Festival where the rank order of the Top 20 winners is announced.
c. The Top 50 candidates in the Home Language examination receive free tuition scholarships for their first year of study at Rhodes University, immediately upon successful completion of the matriculation examinations, and subject to meeting the university’s entry requirements.
d. The Top 15 candidates in the First Additional Language examination receive cash prizes from SACEE.
e. All candidates who complete the paper with sufficient comment receive certificates indicating a classified evaluation ranging from Participation to Gold.