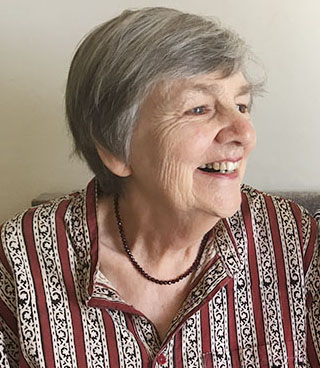 As news of her death spread through Grahamstown, there was an outpouring of grief as well as camaraderie and joy with people who knew her telling stories of an unconventional woman who lived life bravely, to the full, and usually in service to others.

Fellow anti-apartheid activist and former ANC MPL Phila Nkayi, who has known her since the 1970s, described her as his inspiration, mentor and mother figure.

“She was a true democrat.  She felt deeply any injustice committed against anyone, anywhere.”

He said against the odds she had balanced her life as an activist with caring for her family whom she had loved dearly.

Fellow Black Sash stalwart and a friend for more than half a century Rosemary Smith said Priscilla was an activist, meticulous researcher and recorder, egalitarian in her approach to all people, an editor and a fine wordsmith.

“She worked hard for the dispossessed and the destitute in the 1970s in the so-called Homelands and then in the 1980s for the detainees and their families. Idiosyncratic and eccentric, she was a delight to be with …  She pushed the limits and expected others to do the same.”

Louise Vale and Nomkhita Gysman, who both worked with Priscilla at at the South African Committee for Higher Education Trust (SACHED) in the 1980s, described her as remarkably courageous.

“She sacrificed her ‘whiteness’ and privilege to stand with the voiceless –  a hero indeed,” said Gysman.
Just days before she died, Vale wrote to her thanking her for her “compassion, sharp wit and brilliance… Ons het vir niks geskrik (Nothing scared us).”

Former head of Journalism at Rhodes Prof Guy Berger described her as a model of courage who spent years assisting others.

Priscilla Hall was born in England on 27 March 1939, the last of six children.

Along with her mother and five siblings, baby Priscilla boarded a boat to escape the devastating bombing of Britain by the Luftwaffe during World War II. They landed in Cape Town where both her mother and oldest sister succumbed to illness. The remaining five siblings were temporarily split up in foster homes and orphanages, but were brought back together when they were all fostered by a childless Cape Town couple, Muir and Barbara Grieve.

Priscilla attended Rustenburg Primary and High Schools in Rondebosch, Cape Town, and read for her BA degree at the University of Cape Town.

She later spent time in London where those who knew her described her life as being briefly glamorous. In that time Priscilla helped found the College of Journalism in London’s then famous Fleet Street.

She returned to South Africa in 1966 to do her honours in English at Rhodes University under the then head of the English Department Prof Guy Butler.

It was here that the mature student met a young lecturer Ron Hall. They were married in 1968. She lived in Grahamstown for the rest of her life.

As much as this work was fulfilling to her, it was also tangibly empowering to those she was helping.

Nkayi described her fieldwork as meticulous and her counselling as highly effective.

“As much as this work was fulfilling to her, it was also tangibly empowering to those she was helping.”

Nkayi says it was as a direct result of her activism and the organisations that she worked with  that the planned forced removal of residents of the Old Location (Fingo Village) in Grahamstown to the bleak Glenmore area of the old Ciskei was thwarted. She similarly thwarted efforts to relocate people from Riebeeck East and Mgwali to Glenmore.

While her attempts to stop other now notorious forced removal were not successful, he said her efforts served to highlight the tyranny of apartheid.

She had gone on to assist in the establishment of Dependants’ Conference to assist people in detention or facing political trials. Her fight against injustice resulted in the apartheid authorities harassing, intimidating her and finally detaining her under the state of emergency.

Nkayi said she had remained brave even in the face of death and had ensured her husband Ron and daughters Katharine and Ruth remained strong.

Priscilla’s activism extended beyond the political: she organised the Grahamstown National Music Competition for youth, and tours to classical sites together with Classics academic Warren Snowball, to Greece, Turkey, Libya, Bulgaria and to Syria – just two weeks before the war erupted there. She also learnt to prepare fossils for the Albany Museum, where she volunteered, and started and ran the Community Outreach Project for Rhodes University for several years.

Ruth described her mother as “utterly authentic” and said she had never pandered to anyone’s expectation of what she should be in any way whatsoever.

Despite being diagnosed with Motor Neuron Disease, Priscilla reportedly died as she had lived: On her own terms.

Some of us believe in eternal life and others do not, yet in the unconscious matrix of our being, and quite apart from any creed, we find that people who die are still part of life.

She had put in place everything that needed to be done. Letters to the family, to-do lists for Ron, Katharine and Ruth, and she organised for valuable archival material at her home to be packed up and collected by historian Professor Jeff Peires.

On Sunday she declined any further life-prolonging drugs or equipment and on Tuesday afternoon she breathed her last with her loved ones at her bedside – exactly as she wanted it.

In a book penned by Priscilla and her siblings she writes: “There are no real ends. Even when our ashes are scattered they end up as a kind of compost for the next crop. Some of us believe in eternal life and others do not, yet in the unconscious matrix of our being, and quite apart from any creed, we find that people who die are still part of life …”

Priscilla Hall will live on in the heart of all who knew her.

Detail of the memorial service will be announced by the family in due course.