EP U16 stumble on final day 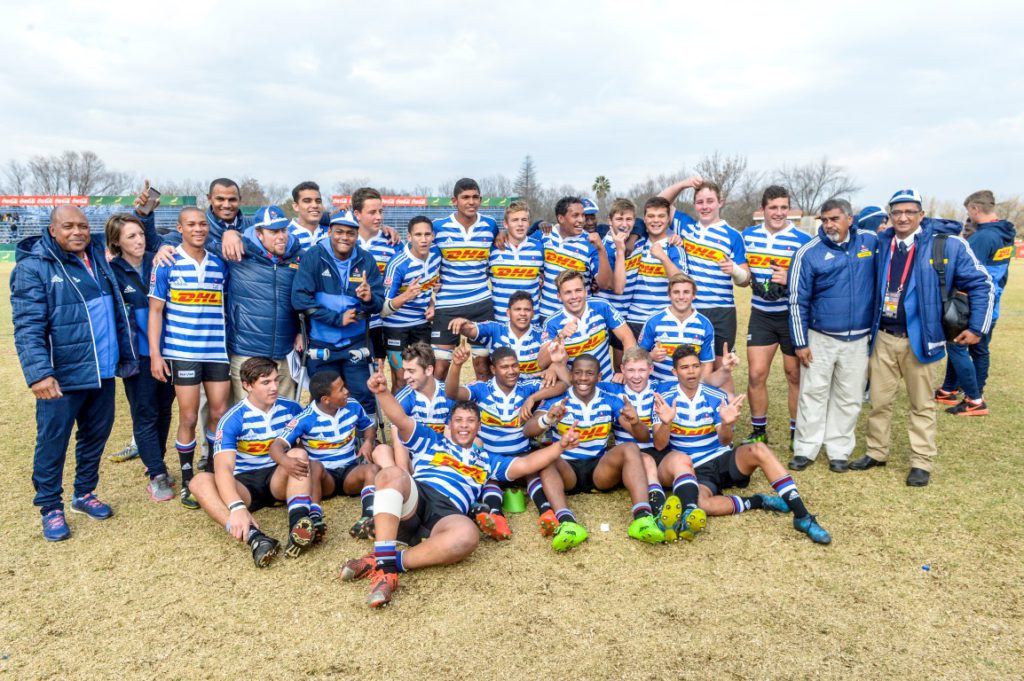 Western Province team after winning the tournament during day 4 of the 2017 U16 Coca-Cola Grant Khomo Week at Grey College on July 14, 2017 in Bloemfontein. Photo: Sydney Seshibedi/Gallo Images

Eastern Province U16 found the going tough in their final fixture of the U16 Coca-Cola Grant Khomo Week at Grey College in Bloemfontein on Friday (14 July). Eastern Province lost 36-20.

The Valke’s forwards laid a solid foundation to power the side to victory against Eastern Province. The Valke started the clash well and built up a 19-7 lead, and they built on this in the second half, which earned them five tries to only two by Eastern Province.

In the main U16 match of the day, The DHL Western Province U16 team snuck through the gaps in the SWD defence to score six tries to only two by the George side. The forward packs were evenly matched and they delivered solid possession for the backs, but the difference between the sides was the Cape side’s ability to convert half chances into points.

DHL Western Province struck first with a try in the opening minutes of the game and they added another later in the half, while SWD earned only one converted try, which handed the Capetonians a 12-5 halftime lead.

SWD struck back immediately after the break to reduce the deficit to 12-10, but four more well-worked tries by the Cape side allowed them to secure an emphatic 38-10 victory.

A try in the dying minutes allowed KZN to snatch a 32-29 victory against the Bidvest Walton Golden Lions in a gripping match. The Johannesburg side led for most of the match and held a narrow 19-15 halftime lead. They increased their tally to 29 points in the second half, but two tries late in the game by the Durban side – one of which was scored on the stroke of fulltime – guided KZN to victory.

Hosts, the Free State, also gave their fans something to smile about as they defeated Border 38-20 thanks to a solid performance in which they scored six tries. Border, who were 24-10 down at halftime, fought back in the second half and managed to increase their try tally to four, but this was not enough to stop the home team, who also added two converted tries to their score.

In their traditional international clash, Namibia delivered a solid performance all-around to cruise to a 59-19 victory against Old Mutual Zimbabwe. Such was the high quality of Namibia’s attack they built up an encouraging 31-5 victory at the break, and then built on this to touch down a notable nine times in total, while they limited their African neighbours to 19 points.

The Itec Blue Bulls also stamped their authority against Boland as they held their nerve following a tight first half to break away with six tries to only four by the Western Cape side for a 43-32 victory. Itec Blue Bulls scrumhalf Jurie Claasens, in particular, had a memorable game as he scored two tries, four conversions and a penalty goal for a personal tally of 21 points.

The Leopards also finished the tournament on a high note as their effective display on attack and defence steered them to a 46-3 victory against Border CD, thanks to a rewarding eight tries. The Eastern Cape side struggled to make their presence felt and were only able to score a penalty goal for their efforts.

Western Province XV showed good form in their clash against the Free State XV to register a rewarding 60-26 victory thanks to an impressive 10 tries. The Cape side led 26-5 at the break, but they gathered momentum in the second half and ran riot on attack.

Griquas, meanwhile, overcame a hard-fought first half against the Pumas in which the teams were level on 12-12 to secure a 24-12 victory. Griquas tightened up their defence in the second half and denied the Mpumalanga outfit from adding to their score, while they continued to use their chances on attack, which allowed them to cross the tryline an impressive four times.

The Griffons outscored the Forever Resorts Limpopo Blue Bulls five tries to three for their 29-19 victory after holding a narrow five-point lead at the break.

The SA Rugby Youth Weeks series will continue next week at St Stithians College in Johannesburg where the U18 Coca-Cola Craven Week and Coca-Cola Academy Week will be hosted.