EP U13 runners-up in Craven Week 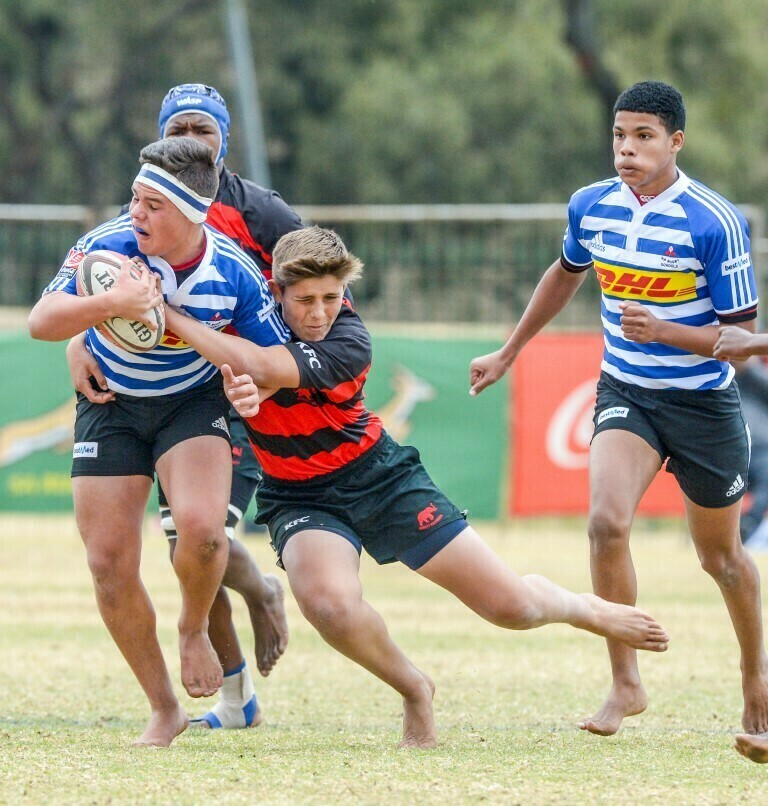 It was a rewarding day for DHL Western Province in the U13 Coca-Cola Craven Week and U16 Coca-Cola Grant Khomo Week at Grey College in Bloemfontein on Friday as both teams won the final matches in their respective SA Rugby Youth Weeks in style.

The U13 Coca-Cola Craven Week team earned top honours in the competition for the fifth season in a row as they defeated Eastern Province 28-0, while the U16 Coca-Cola Grant Khomo Week team beat SWD 38-10.

The Western Province U13 team got their match off to a flying start against Eastern Province as they retained possession and applied pressure on attack, which earned them two early tries. Eastern Province tried hard to make a breakthrough, but the Cape side’s solid defence held them out. Another well-timed try by Western Province before halftime extended their lead to 21-0.

The Cape side continued their fine form in the second half and did well to sneak through the gaps in the Eastern Province defence, which earned them another try to take a 28-0 lead. Eastern Province tightened up the defence as the game progressed, but while this proved to be effective in denying Western Province from adding to their score, they were still unable to make their presence on attack.

The clash between Border and SWD was thrilling as the teams gave everything on attack and defence, which resulted in a competitive match that ended in a draw. The sides were level at 10-10 for most of the game before SWD broke through to score a converted try. But this was cancelled out in the dying minutes as Boland forced their way through to the tryline for a 17-17 draw.

The Itec Valke and KZN also played to a 24-24 draw, as the Kempton Park side staged a second-half comeback from 12-19 down to match the Durban side’s four tries. Itec Valke, lock Aiden Smith and winger Happy Nhlapo each scored a brace to allow the team to draw the match.

In another nail-biting encounter Border pipped Forever Resorts Limpopo Blue Bulls 31-29 with three conversions to two by the Limpopo side being the difference on the scoreboard. Border took an encouraging 19-5 lead at the break, but the opposition hit back strongly in the second half, while Border continued to show their determination on attack. The result was that both teams finished the match with five tries. The match was particularly special for Border winger Mihle Matinise, who finished the tournament with a hat-trick.

The Leopards, meanwhile, pipped the Free State 20-19 as they out-scored the hosts four tries to three. Free State started the match well and built up a 14-5 lead, but the Leopards fought back with intent to score three tries to only one by the hosts, which sealed the victory.

Namibia’s goal-kicking sealed their 27-20 victory against the Griffons, as their penalty goal and two conversions proved to be the difference on the scoreboard. The Griffons led 10-5 at the break, and they added another two tries in the second half, but they were unable to convert any of them. In turn Namibia slotted over three kicks to add to their four tries.

The Pumas, meanwhile, earned the biggest winning margin in the tournament as they outplayed Border CD 106-0 after running in a notable 18 tries. Lock Divan Venter scored a hat-trick with four players scoring two tries in the match.

The Xerox Griquas, meanwhile, overcame a tight first half against Old Mutual Zimbabwe in which they led 15-7 at the break to register a 37-21 victory, as they outscored Zimbabwe seven tries to three.

The Itec Blue Bulls and Bidvest Waltons Golden Lions were involved in a tight tussle, but the Pretoria side’s four tries to only three by their neighbours allowed them to seal their 26-17 victory.

The SA Rugby Youth Weeks series will continue next week at St Stithians College in Johannesburg where the U18 Coca-Cola Craven Week and Coca-Cola Academy Week will be hosted.