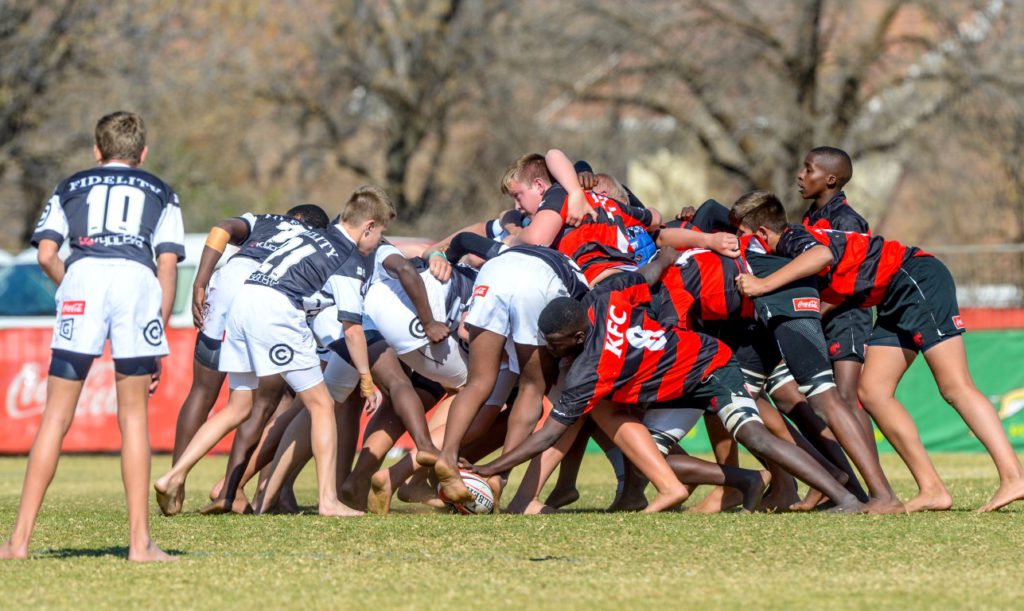 KZN against Eastern Province during day 2 of the 2017 U13 Coca-Cola Craven Week at Grey College on July 11. Photo: Sydney Seshibedi/Gallo Images

Only four of the 18 teams participating in the U13 Coca-Cola Craven Week at Grey College in Bloemfontein remained unbeaten at the end of the second day’s play on Tuesday (11 July) as the tournament switched into a different gear.

Nine teams entered the day’s play with round-one wins in the bag, but Eastern Province, the Golden Lions, Western Province and the Blue Bulls were the only unbeaten teams by the end of the round.

The clash between Eastern Province and KZN was nail-biting as the teams fought until the end, with the Eastern Cape outfit just pipping their Durban counterparts. Eastern Province outscored KZN three tries to two in what was a tight tussle from the outset, but it was EP’s defence that stood out as they shut out the determined KZN team close to their tryline on several occasions in the dying minutes.

The Golden Lions produced an effective performance to build up a 15-0 halftime lead against Border. But the Eastern Cape side fought back strongly in the second half and scored two tries compliments of Litelihle Bester, one which was converted. A second-half penalty goal by the Lions, however, saw them secure an 18-12 victory.

Western Province, meanwhile, overcame a strong challenge from the Limpopo Blue Bulls in a physical encounter to register a 41-10 victory. The Cape side was particularly strong at taking advantage of the opposition’s mistakes and using their fantastic support play to sneak their way through the gaps and around the defence. This earned them a rewarding seven tries, while they limited the Limpopo side to two.

The Blue Bulls literally powered their way to a 22-0 victory against SWD as the team played to their strengths by using their bigger players to force their way through the defence, which they backed up with good support play. SWD tried hard to force their way into the Blue Bulls half throughout the match, but the Pretoria side’s solid defence combined with their ability to win turnovers denied the George side from scoring a single point for their efforts.

Earlier, Namibia ran circles around Border CD on attack. Their forwards laid a solid foundation upfront and their backs ran hard on attack and snuffed out the gaps in the defence. This effective display earned them a staggering 14 tries, with centre Jurenzo Julius and Louw Rossouw each scoring a hat-trick, which they also converted, to guide the team to a 92-12 victory.

The Griffons dominated their clash against the Pumas from the outset and they did well to force their way over the advantage line, which earned them two first-half tries and a 17-0 lead at the break. They added another try in the second half, while Pumas winger Samkelo Ntshapela touched down twice for his team. But these efforts were not enough, and left them settling for a 22-10 defeat.

The clash between the Valke and Griquas was quite physical as the teams used their forwards in an attempt to gain ascendancy. The Valke, however, had the upper hand as they managed to break through the gaps in defence and they used their chances well to run in six tries, while they conceded only one, for a 36-7 victory.

Leopards flanker Divan Pieters, meanwhile, was a star player in his team’s 66-7 victory against Zimbabwe as he scored four of the side’s 10 tries in a one-sided encounter. Zimbabwe managed to score only one converted try in the first half and they were unsuccessful in their attempts to add to this in the second half as the Leopards defended with intent.

Boland put their speedy backs to good use in their clash against hosts, the Free State, which paved the way for their 26-10 victory. Boland scored two tries in the first half and added two more after the break, while Free State No 8 Johannes Hendrik Botha scored in each half in what marked the hosts’ only points.

The U13 teams will have Wednesday off to recover from the opening two rounds, while the U16 teams will battle it out in their second round after resting on Tuesday.