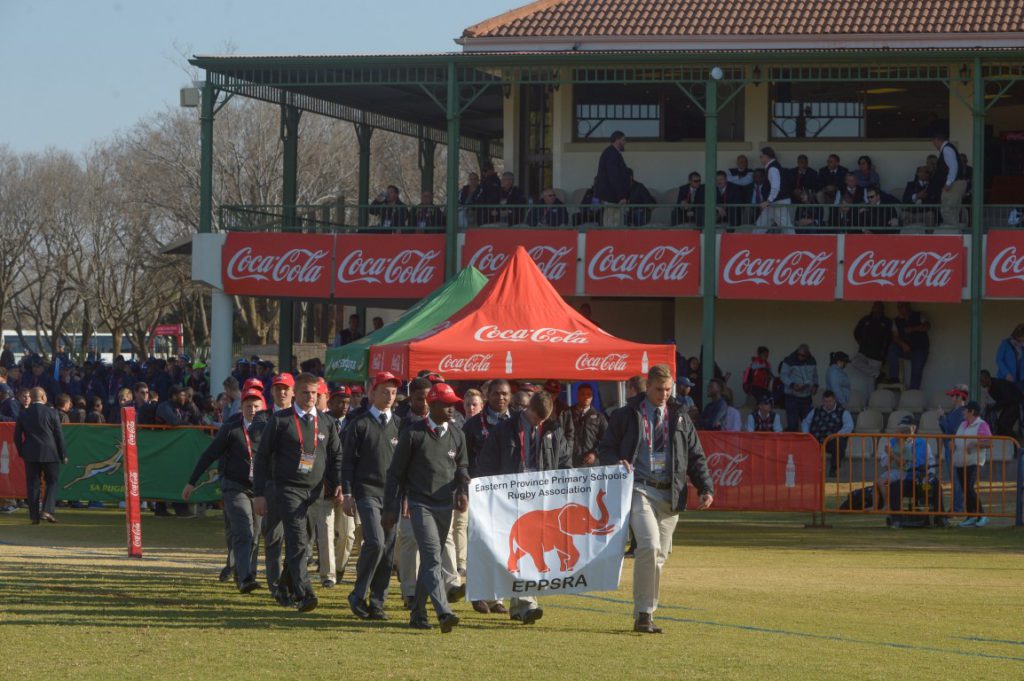 EP U13 at the Opening ceremony on day 1 of the 2017 U/13 Coca-Cola Craven Week and U/16 Grant Khomo Week at Grey College on July 10, in Bloemfontein. Photo: Sydney Seshibedi/Gallo Images

The U13 Coca-Cola Craven Week got off to a thrilling start at Grey College in Bloemfontein Monday (10 July) with a number of big wins on the opening day’s play.

Western Province, the Blue Bulls, Zimbabwe and Eastern Province stamped their authority in the U13 Coca-Cola Craven Week.

Western Province, who came out tops in the last four U13 Coca-Cola Craven Week competitions, were in fine form against the Griffons as they cruised to a 71-0 victory. Their forwards laid a solid foundation upfront and their backs showed their class out wide, which paved the way for their 11 tries – four of which were scored by winger Ken Tchimanga.

Blue Bulls flanker Tiaan Engelbrecht, meanwhile, proved to be a star performer in his team’s 45-12 victory against hosts, the Free State, as he scored four of their seven tries. The team backed up this impressive display on attack with a solid showing on defence, and limited the Free State to two tries.

Zimbabwe also made a strong statement in their opening game as they defeated Border CD 41-0 thanks to their impressive attack and defence. In total they crossed the tryline seven times after taking a 22-0 halftime lead.

A hat-trick by Eastern Province No 8 Luvuyo Nkomphela, meanwhile, set up the Eastern Cape side for a convincing 32-15 victory against the Leopards, in which they ran in an impressive six tries and limited the opposition to only two.

The remaining matches were also exciting, with the Limpopo Blue Bulls and Boland involved in a tight tussle. The Limpopo side used their forwards to lay a solid foundation up-front for their backline to attack from, while Boland tried to run hard to gain ascendancy on attack. The Limpopo Blue Bulls, however, outscored the Western Cape outfit three-tries to two, which allowed them to secure a narrow 15-14 victory.

Border’s pin-point goal-kicking, meanwhile, earned them an 18-15 victory against the Pumas as flyhalf Bradley Giddy converted one of the teams tries and slotted over two penalty goals to add to their two tries, while the Pumas scored three unconverted tries.

SWD outscored the Valke 17-14 in a gripping match in which either team could have won. Three tries by the SWD to only two by the Valke, however, earned them the three point victory.

The Golden Lions and KZN ran hard at one another from start to end, but the Lions’ constructive attacking play and ability to break over the advantage line allowed them to take a 16-7 lead at the break thanks to their two tries. Each team were only able to add a try to their score in the second half, which earned the Johannesburg side the 23-14 victory.

Three penalty goals by Griquas flyhalf Theunis Hohls, meanwhile, allowed them to secure a narrow 21-19 victory against Namibia in what proved to be a tightly-fought encounter, despite the visitors scoring three tries to only two by Griquas.