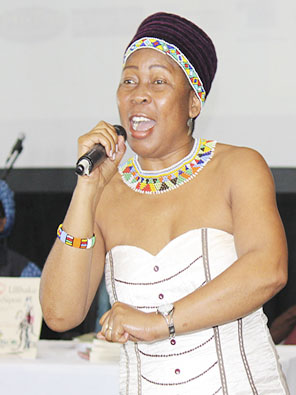 Gcina Mhlophe, well-known award-winning author, poet, playwright, director, performer and storyteller will be inspiring the Grade 12 delegates as this  year’s  keynote  speaker  at  the  official  opening   of   the   42nd edition of the National  Schools  Festival.  Mhlophe’s writing and performance talent has transported her from South Africa to North America to Europe and Japan. She  has  performed  her stories in theatres like Royal Albert Hall and the Kennedy Centre in the US  and has collaborated with Ladysmith Black Mambazo on a children’s CD. Mhlophe has been  awarded  several  honorary doctorates. Rhodes University honoured her in 2014 for her sterling contribution to South African literature.

Much excitement and anticipation abounds with just a few days to go until the opening of the National  Schools Festival. A total of 350 delegates from around South Africa will gather for this four-day event.

Organised by the Grahamstown Foundation’s Arts Education department, and supported by Rhodes University and the National Arts Festival, the Schools Festival team worked diligently to create an immersive arts programme packed with unforgettable  experiences including challenging, provocative and inspirational arts-for-thought. Events are geared towards  translating an intensive creative experience into self-confidence, discovery and a lifelong passion for the arts while enriching the perspectives of the participants and  stimulating the South African arts industry.

The programme for 2017 includes an astonishing 22 events, selected from some of the most talented artists throughout South Africa.

But exhilarating performances are not the end of delegates’ exposure to the  arts  at  this  festival. Grade 12s will gain a hands-on, interactive learning experience in the workshop sessions. Workshop facilitators include: Terri Elliot on the style of Brecht, local dance performer Ayanda Nondlwana, Raj Naidoo who will keep the thumbs  away from the cellphones with his 90-minute workshop in the art of Calligraphy, and members of the First Physical Theatre Company and Rhodes Music Radio  (RMR) will share their  valuable skills and experiences.

Festival participants this year will have the opportunity to explore the fundamentals  of  storytelling,  physical  theatre African drumming and percussion and African indigenous music, visual literacy, and free-styling with Panstula dancing. They will also  get  an opportunity to discover their creative abilities and  the power of drama and through fine art and improvisation.

Courtesy of AFDA: The School of Creative Economy, delegates will get front-row seats to the world of film making presented by Jamie Petersen. Rhodes University’s Department of Fine Art, Christine Dixie and Heidi Sincuba will present an art walk and give practical lessons on how collaborative creativity.

Delegates will have the chance to develop and explore their creative potential practically, with the aim of learning how to use the arts to  communicate  and  to  empower  themselves. This year’s Conversations will challenge learners’ analytical capacity in  taking a critical look at themselves and the world around them. The well-known and versatile creative, Daniel Mpilo Richards, who performed in two shows at the Tennessee Williams Theatre Festival in  Provincetown in 2015 and won a Standard Bank Silver Ovation Award at the 2016 National Arts Festival, will give a featured lecture.