New commander steps in for 6SAI 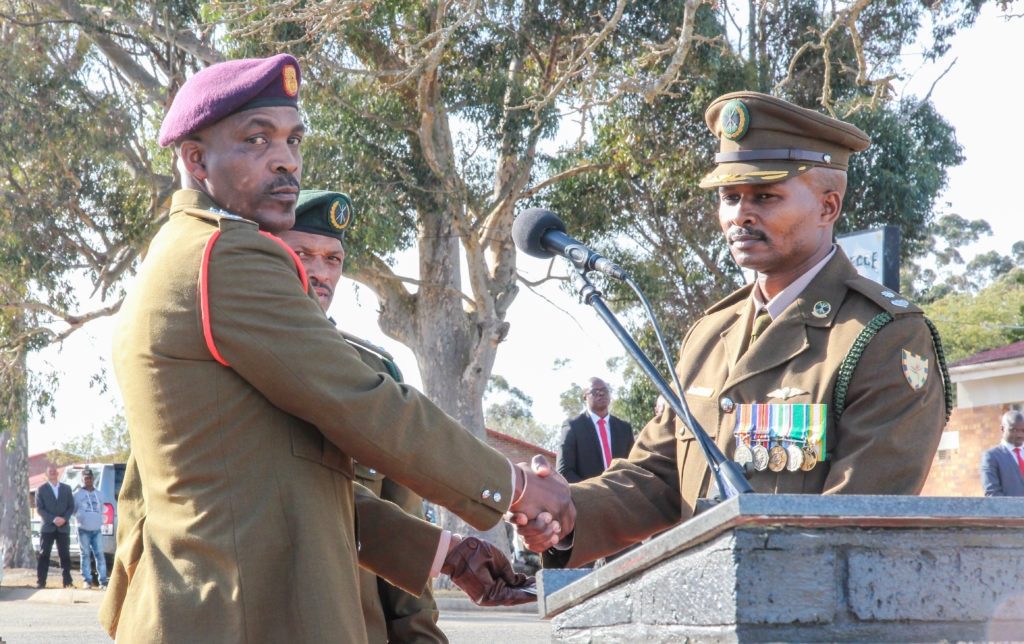 Ooutgoing Officer in Command of 6SAI, Colonel VD Maseko (left), has handed over the reins to Lt Col MA Saki.

Thursday 6 July 2017 was an historic date for Grahamstown’s army base, officially known as 6SAI (6 South African Infantry) as they handed over the change of command from outgoing Colonel VD Maseko to the new Officer in Command Lt Col MA Saki and welcomed home troops deployed from the unit to Operation Corona.

The lively parade entered the army grounds with a red-clad marching band moving in unison, ahead of the second wave of armed soldiers who marched in perfect sync behind the instruments which all came to a halt for the General Salute. Makana Mayor Nomhle Gaga had a place of hnour among dignitaries from South African National Defence Force units all over the country.

Outgoing OC Colonel VD Maseko has served in the position at 6SAI since 2015, and his rise up the leadership ranks are the result of his extensive experience, from a career as an activist, joining the South African Students Congress as a student, to being recruited through the  ANC Youth League to Mkhonto we Sizwe’s training camps in Mozambique and India.

Maseko returned from exile and joined the SANDF in 1994, and has served in a number of military leadership posts all over the country prior to his appointment as OC (Officer in Command) of 6SAI in 2015. Since January 2017 he has been OC of 44 Parachute Regiment in Bloemfontein and Durban and officially handed over his command at 6SAI to Lt Col MA Saki to occupy “with zeal, diligence and setting a good example”. Maseko expressed gratitude for his family and wife Nomakhaya Maseko especially, for understanding his call of duty through the years that came with relocating regularly and leaving her to raise their nine children at times and in places that were not easy to adjust to.

Talking to Grocott’s Mail, Maseko shared that the troops deployed from 6SAI to Operation Corona had not faced any major incidents; however, they had been ready for anything. He commended the troops for their service defending borders, a duty which could be life threatening. Severe weather conditions and being shot at were just some of the risks.

“The SANDF’s primary role and value of Operation Corona is to protect South African borders and our sovereignty, to minimise the influx of displaced people that try to occupy our country illegally,” said Maseko.

While the SANDF are not directly involved in apprehending rhino poachers, due to their visibility in those areas, they find themselves assisting. “It is the primary role of game police and rangers as well as the police,” he said.

There are currently 15 companies at the ground at Operation Corona; however they are planning to increase the number to 22 companies according to a recent statement by minister of Defence and Military Veterans Nosiviwe Mapisa Nqakula.

Saki is a man from a military background similar to that of Maseko, spanning student activism with Sasco, MK training at Nkabinde and Sudan, as well as having served in the peacekeeper force.

Saki started serving at 6SAI in 1995 and ascended through many junior leadership positions. His stay at this unit since 1995 resulted in his being chosen as the right candidate for the position as the new OC of 6SAI battalion. His wife Yolanda Saki was there to support him with their three children.

Lt Colonel Saki said 6SAI’s presence in Grahamstown was beneficial to the community, when it came to coordinating certain security measures benefiting local businesses. They are also responsible for the 700-800 people who are employed at the base, and a number of initiatives they take part in throughout the year to reach out to the community with the aim of connecting with and improving the environment of Grahamstown.