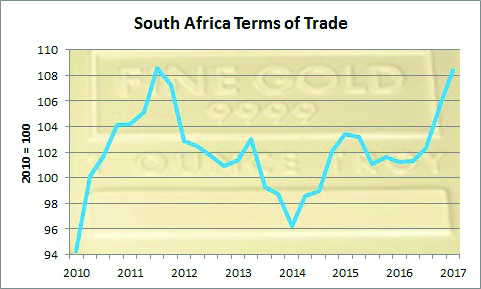 The terms of trade are a measure of what a country gets for its exports relative to those of its imports.  Terms of trade data are often recorded in an index so that economic monitoring can be performed and it is easy to draw conclusions relative to the base year. For example, one ounce of gold could buy 24 barrels of oil in the first quarter 2016, but now that same ounce of gold can buy 30 barrels of oil. The South African Reserve Bank (SARB) reported that the terms of trade rose to its best level since 2011 as it reached 108.4 in the first quarter 2017 from 101.2 in the first quarter 2016. This means that relative to the base year of 2010, South Africa received 8.4% more import volumes for the same amount of exports. This improvement is also reflected in the exchange rate as South Africa gets more US dollars for the same volume of exports. This is reflected in the 40% surge in South African export value in January 2017 compared with a year ago, which resulted in a 21% improvement in the rand compared with the US dollar.

A stronger rand means South Africa has to pay less for imports, so the price of imported commodities such as oil comes down. Lower inflation then boosts the spending power of consumers, which results in a boost to economic growth.  Lower inflation can also prompt the SARB to cut interest rates, which will help consumers to repay their debt faster.

So the seldom reported terms of trade have confounded economists who were expecting the rand to remain weak and trade above R14 per dollar, instead of trading below R13 per dollar. As the forecasts from Consensus Economics show, forecasting an exchange rate is very difficult and the narrative of “bad news” headlines may not be reflected in the good news at a country’s ports. That is why economists should monitor the terms of trade and the export volumes.