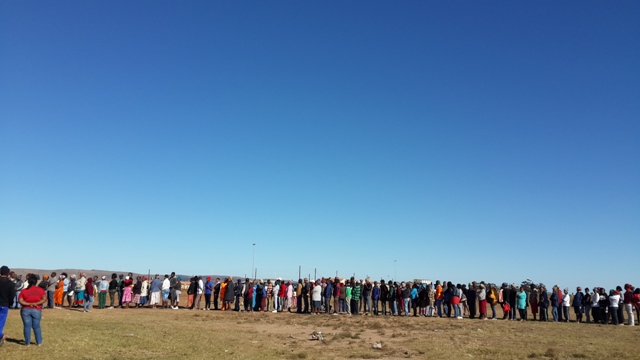 A councillor says while he’s sympathetic to the plight of hundreds of people who since Sunday have gathered on open land east of Grahamstown to be allocated plots, he fears they are being misled with false hope. Simultaneous service delivery protests Monday in which the R343 at Salem and the R67 to Port Alfred opposite Manley Flats were blockaded meant municipal officials were stretched and, with no intervention, residents Tuesday continued to prepare sites they believe are theirs for construction.

Around 300 people had gathered Monday on vacant land opposite the Mayfield Extension 10 housing development. Most queued patiently to have their names recorded in a book by a group who identified themselves as the committee allocating plots. However, no council officials were present. The Ward 3  councillor, who serves the Extension 10 Mayfield area, knew nothing of the move until he saw the crowd, and said he feared desperate people were being misled for political ends.

When Grocott’s Mail arrived around 11am, around 150 people were queueing on veld at the north end of Joza Street in Extension 9. Some were seated on chairs they had brought; many had brought children, who played nearby. The mood was positive and hopeful, with most believing their prayers for land had at last been answered. Scattered across the veld were another 150, some marking out plots and others preparing allocated plots for construction.

“We’ve come to write our names for land,” said a woman midway along the queue. She declined to be named. Like most of those interviewed, she said having to share accommodation with a large extended family, and pay rent, were the things bothering her.

“We want to build ourselves houses. It can be a daga house, or what, we don’t mind. We haven’t got a place to stay. We stay with our children and our great-great grandchildren in one house. And those houses we’re staying in, they’re houses we’re renting.”

A young woman near her said, “We want our own houses because we are so sick and tired of always borrowing from other people. Lots of people are renting, and they can’t afford to do that all their lives. They need their own house.”

Extension 9 resident Nyameka Mswana, who was one of those addressing the group, said “It’s because we need houses. We don’t have money for rent and we desperately need houses. Now we see this open space here. We wrote a letter to the municipality about it but they didn’t give us a way forward.

“The people see this is an open space and we can build our shacks here so we can be relieved from paying rent.”

Mswana said the numbers of people queuing for the land had grown.

“Today [Monday] there are more people than yesterday. People are so desperate. Most people are from outside Grahamstown, others from various parts – Extension 6, all over Grahamstown – they are so much in need of houses. But because the municipality doesn’t build houses for us, we as the people, we decided to build our shacks here. That’s it.”

However, it’s not clear how people qualify to be allocated the land, and those doing so are doing it on the authority of an ad hoc committee which has no name..

One of those speaking for the committee was Extension 9 resident Fezile Mthathi.

Asked how sites were being allocated, he said it was a committee deciding on who got land.

But there were some confusing aspects about the allocation criteria.

He said a meeting had been called on Sunday to inform the community that anyone without a place to stay should come to the site.

Allocation was on a first come, first serve basis, he told Grocott’s Mail.

Yesterday, he said according to the number of names thus far recorded, they were allocating around 800 plots. However, they hoped to increase this to around 2000.

If someone already had land somewhere else, Mthathi said, they weren’t eligible for land at the site.

“Some of them they come from other areas and they own the land there, they own houses. So we just scratch those people. We rather give someone a place to stay who doesn’t have a shelter,” Mthathi said.

Asked how the committee established whether someone owned land or not, Mthathi said because Grahamstown is a small town, they knew everyone.

Asked again whether this scheme was only for Grahamstown people, though, Mthathi said, “Yes, so far. But those on farms who don’t have a place to stay, they are welcome.”

Another committee member, Simphiwe Ludinga, said some of those queueing did in fact own land and houses.

“They’re coming to ask for land for their children, grandchildren and great-great-grandchildren,” Ludinga said.

“Some of those children, maybe their parents have passed away.”

How the committee established this was by visiting those homes, Ludinga said.

However, Ludinga said it wouldn’t be necessary to check all of the 2000 households that they hoped would be allocated land, because they already knew those families.

When Grocott’s Mail returned to the site on Tuesday, a number of people east of the allocation area, opposite the Transit Camp informal settlement were marking out their own plots, and Mthathi said they were struggling to keep control of the process.

“They are making their own plots down there,” Mthathi said. “But we can’t stop them.”

It appeared that group had grown impatient to be allocated plots.

“We’ve put a hold on registering new people,” Mthathi said on Tuesday. “We think some of those who have registered have their own houses, and just wanted to move.

“We didn’t promise everyone would get land,” Mthathi said. “Anyway, the land is nearly finished – we’ve registered more people than we can fit here.”

He said while there weren’t many people there on Monday and Tuesday, by the end of the weekend, there would be a number of structures built on the land.

“It’s because people are at work,” Mthathi said. “When they are home for the weekend, you will see. This place will be full.”

He said they had named the area Indlovu (elephant) because they had taken it by force.

“The municipality didn’t give us this land,” Mthathi said. We took it.”

“Usually there are the meetings with the Mayor where and people say they don’t have a place to stay. It’s at those meeting that we identify those people.”

Directing the measuring of the plots, some distance away, was Asanda Bobo. He said the plots were 18m x 28m.

“That’s enough for one person,” he said.

Bobo said the dimensions were based on similar operations he had carried out  in other places.

“Because it’s not the first time we’re doing this. We’ve done this in lots of other places – East London, Joburg – for people who have no houses, for people who are renting,” Bobo said.

Ntombozuko Jacob who lives 50 metres from where the crowd was gathered, was very sympathetic towards the people there who had come with great hopes.

“I think this is the best way for them to find a place to stay,” Jacob said. “There are many people here in Grahamstown who are homeless. Instead of them having to pay rent, or not having a place to stay, I think that if it is comfortable for them, this is the best way for them. Then they’ll have their own homes with no rent, because there is this junk status thing now, so the cost of living is to high.

Ward 3 councillor Mthunzi Fatyi said he’d known nothing of the land allocation  until he saw the group gathered and enquired.

Fatyi said he feared the would-be beneficiaries were being misled.

“I think this is very serious,” he said. “Ward 3 has a lot of informal settlements,” Fatyi said. “Many of these people are really in need of houses. But this is being organised by people with their own agenda.”

He said quick intervention was needed by the Mayor to explain to the land hopefuls what the processes were to apply for land.

“Otherwise I think they will continue.

“Those people allocating land are not officials from the municipality. We don’t even know where they are from except that apparently they come from various wards.

“You can’t allocate land without involving the institution,” Fatyi said. “You can’t just write people’s names up when you are not an employee of the municipality. It’s wrong of these people to make promises they can’t keep.”

Afriforum and AfriBusiness, its business wing, were in March granted a high court order against the Economic Freedom Fighters leader Julius Malema that interdicts him and the EFF from inciting illegal land grabs (news24.com).

In August 2013, former Mayor Zamuxolo Peter confirmed allegations of corruption in the allocation of RDP houses in Mayfield, Extension 10 (Grocott’s Mail). Peter confirmed that field workers had scratched names off the lists and replaced them with those of friends and relatives.

Council officials have since been under pressure to rationalise and verify housing allocation lists.

The Mayor’s opening address Monday morning to a national languages conference at Rhodes University had to be rescheduled earlier, as she rushed off to address service delivery protesters at Manley Flats and Salem.

During a break in a Special Council Meeting at the Council Chambers yesterday, Infrastructure Director Dali Mlenzana said the Mayor had addressed protesters on the R67 opposite Manley Flats.

“They have been disappointed by service delivery promises made by a councillor and not fulfilled,” Mlenzana said. The promises had included the supply of  electricity, and flush toilets.

Mlenzana said communication with that community had been poor.

“When they Mayor spoke to them though they agreed to stop their protest.”

Sources said the protests had continued today, however.

Commenting late yesterday on these, police spokesperson Captain Mali Govender said, “The SAPS responded to a service delivery protest near Salem. The group of protestors were addressed by  municipal officials regarding their dissatisfaction. They dispersed with no further incidents occurring.”