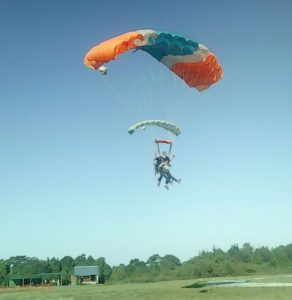 The parachute packing skills that Mkhuseli Tukulula, who is not small, but it is the name by which his friends know him, had acquired over many weekends at EP Skydiving since 2002, stood him in good stead last weekend. At the international tandem skydiving event held at Plettenberg Bay, “Small” showed that he was the man for the BIG occasion, as he came second in the parachute packing competition, behind a German, but ahead of a Frenchman.

The competition values both speed and accuracy. Speed in that packers have only ten minutes in which to spread the chute, check the lines and then pack it before it needs to be used by the next tandem parachute team. Accuracy, as it is a literal matter of life and death, because when the chute opens 10 000 feet above the ground, there cannot be any snags that cause the chute to furl and not deploy fully. Everybody is equipped with an emergency chute, but this is smaller than the standard chute, so it makes the landing harder. The idea of sky diving is to float like an eagle, not land like an elephant, so Small’s attention to detail was welcomed by the competitors as they knew that a chute packed by him would open faultlessly.

This attention to detail is what makes him a sought-after machine operator at the embroidery establishment “9 and ¾” and helped him as he progressed from Samuel Ntsiko Primary School to Archie Mbolekwa Primary School and Nathaniel Nyaluza High School.

When Grocott’s Mail him interviewed him this week, he said it was beginner’s luck that he had done so well, as that was the first international competition that he had ever entered. Given that he has spent the past 15 years watching at least 30 jumps per weekend at EP Skydiving, we expected him to be a veteran of hundreds of jumps, but he said that he only had one tandem jump back in 2008 and that jump had given him an adrenaline rush that would last him a lifetime.

The cherry on the top for this fairy tale as far as we were concerned was that he will use the winnings to pay lobola so that he can marry Xoliswa Klaas in September. Our best wishes for a long and happy marriage!