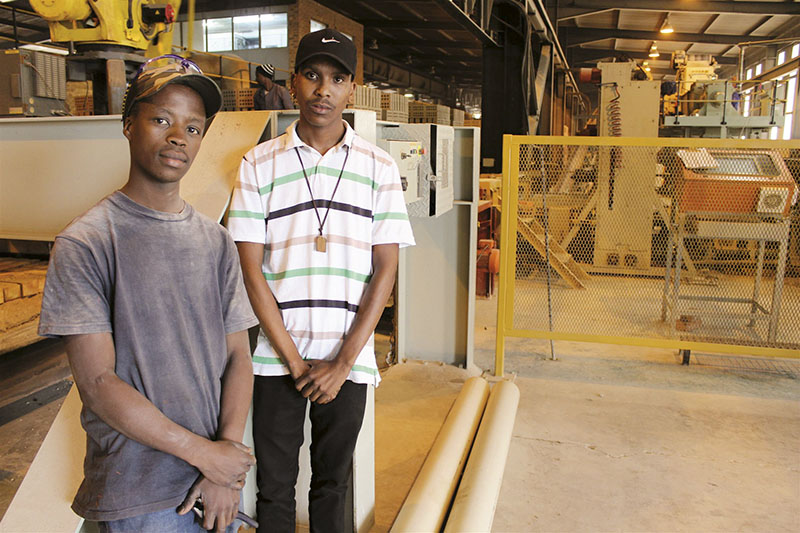 An internship at Grahamstown’s Makana Brick has provided Akhona Ntlanjeni with a once in a lifetime opportunity.

“You know, there are so many people who have skills, but are sitting in the location. I feel very fortunate that I have the chance to use mine,” Ntlanjeni said.

In 2014, he was enrolled at the Gadra Matric School, intending to improve his marks, when he heard through the Assumption Development Centre about internship opportunities at Makana Brick.

He applied, and made it through the interviews.

“I studied commercial subjects at school,” Ntlanjeni said, “but I always knew that what I really wanted was to work with my hands rather than in an office.”

Which was bucking the trend, according to Makana Brick’s human resource manager Lunga Twaku.

“Before we interview applicants for internships here, we take them around the factory,” Twaku said.

“But what we usually find is that most applicants are more interested in administrative work.”

Makana Brick’s website boasts that it is the largest clay brick manufacturer between Durban and Cape Town, and in an urban environment where so many lack proper housing, it might seem logical that the skill they would learn is bricklaying.

Twaku explained that Makana Brick has indeed facilitated bricklaying training, footing the bill for qualified bricklayers with local construction companies to take time off to train 10 candidates for 10 days.

“We will do it again,” said Twaku. “But it’s not as simple as it sounds.

“Sourcing candidates who really want to become bricklayers is not as easy as announcing free training.”

A significant proportion of the participants had evidently not really been interested in learning bricklaying, Twaku said.

What has been far more successful is bringing likely people into the programme through the ADC’s internships programme.

At Makana Brick, learnerships focus on training fitters and electricians in its large factory.

From apprenticeships in these trades at the factory, they have the opportunity to qualify through training that includes two-week stints, four times a year, at the VW factory in Uitenhage as well as PE College.

This year they have two electricians in the system, one of whom will be doing their trade test in March, and three maintenance fitters.

“This has been a wonderful opportunity for me,” said Ntlanjeni, who is doing his apprenticeship as a fitter. “It’s something I really wanted to do.

For Phila Skweyiya, a TEM Mrwetyana and Gadra matric School graduate, the excitement for him has been in school chemistry lessons come to life.

“I wanted to go to varsity,” Skweyiya said, “but I applied late to NMMU.”

Through Gadra Matric School’s partnership with ADC, he was interviewed along with five other candidates for an internship at the factory.

He started work as a data capturer for the factory’s laboratory last year. “It’s real-life work with chemicals,” he said. “You really understand how to make bricks from scratch.”

Skweyiya is himself helping new interns along the road. The confidence this has given him, plus his knowledge of the factory’s products, has prepared him or sales, he feels – and that’s the area he’d like to tackle next.

“It’s for this reason that we partner with several organisations – St Mary’s DCC, Gadra Education and the Ubunye Foundation – to source people with the best chance of success.”

Through its network of 450 members, and through its own programmes such as Tabiso Life Skills, the ADC publicises the internships. From there the selection process results in quite a sharp dropoff.

“At Makana Brick, for example, we’ll take 10 people for a walkaround tour.

“Of those, six will be interested to some degree. And of those interviewed, two are selected.”

Scholtz said they were very lucky to have Makana Brick and, in particular, Twaku to work with, as a partner.

The ADC aims to get buy-in to the programme from more local businesses.

Getting more businesses involved in learnerships, along with creating opportunities and support for small businesses and entrepreneurs, are the cornerstones of the Centre’s work to assist the creation of a viable economy in Grahamstown.

The challenge for Grahamstown, says organisational mentor at the Assumption Development Centre local economic development hub in Joza, Martin Scholtz, is that it has a very small and select formal economy.

“The ADC would like to see other businesses approaching us for potential candidates.”

Scholtz cites the statistic that if a young person works for one year, they have an 80% chance of employment in the future.

“With this internship programme, we don’t have all the answers,” says Scholtz.

“We’re trying hard to create opportunities for youngsters in Grahamstown, but it is a bumpy road. It’s a work in progress.”