Consumers mildly exposed in the first quarter despite macro turmoil 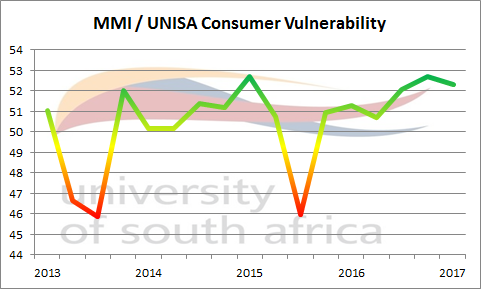 The MMI/ Unisa Consumer Financial Vulnerability Index (CFVI) showed that South African consumers are mildly exposed as the index slipped 52.32 in the first quarter from 52.71 in the fourth quarter, but remained above the average of the past few years. The record low 45.92 reached in the third quarter 2013. The CFVI measures consumers’ sentiments in terms of their income, expenditure, savings and debt servicing. The term ‘Consumer Financial Vulnerability’ implies that consumers experience a sense of financial insecurity or an inability to cope financially.

MMI’s, Shelley van der Westhuizen says this drop is not surprising given the destabilising uncertainties in the macroeconomic environment including the cabinet re-shuffle, credit rating downgrade, rising unemployment and negative GDP growth in the quarter.

More than one in three (34.9%) CFVI respondents felt that unemployment was a critical factor in their perception of financial vulnerability, but this was closely followed by the high cost of living (32.1%); low income/insufficient salary increases (27.4%); too much debt (24.5%); and poor financial planning (21.7%).

Real disposable income of households suffered a 1.6% quarter on quarter seasonally adjusted annualised (q/q saa) decline in the first quarter according to the South African Reserve Bank (SARB), so it was not surprising to see the income vulnerability score drop to 53.02 in the first quarter from 53.60 in the fourth quarter.  This higher income vulnerability was driven by the number of respondents that expressed negative sentiments with respect to consumers’ ability to earn an income (56.8%), or acquire income from family or friends during the past three months (58.6%).

The expenditure vulnerability score fell to 53.78 in the first quarter from 56.53 in the fourth quarter as less income meant that consumers could spend less. This drop in expenditure was confirmed by Statistics South Africa’s economic growth figures that showed a 2.3% q/q saa contraction in household consumption expenditure in the first quarter.  The deteriorating expenditure vulnerability score was underpinned by the 61.3% of respondents who felt consumers were unable to stick to their expenditure budgets. According to MMI, moderating inflation should provide some financial relief to consumers, but consumer spending is likely to remain subdued while confidence in the economic and political environment remains low.

The perceived loss of income and therefore lower expenditure meant that the savings component increased to 52.32 from 50.83. There is a precautionary aspect to this increased due to the macroeconomic turmoil that has increased uncertainty as  households cut back on non-essential expenditure to save for a rainy day.

The debt servicing sub-index eased to 50.16 in the first quarter from 50.40 in the fourth quarter. This takes them closer to the brink of the very financially exposed category. Some 60.4% of respondents felt that consumers had to consider reducing other financial commitments in order to repay their debt during the first quarter. The CFVI survey results also show that almost three quarters (74.8%) of respondents indicated that consumers’ severe debt situations forced them to consider seeking assistance from someone else. This was confirmed by the SARB’s credit extension growth numbers that indicated a sharp slowdown in banks’ credit extension to households (only a 0.6% year-on-year growth rate in the first quarter and well below the inflation rate near 6%). This means that consumers’ ability to take up more credit decreased and there was less credit available to consumers.

The reduction in debt to cope with reduced income was reflected in the SARB’s data that showed an easing in the household debt to income ratio to 73.2% in the first quarter from 73.5% in the fourth quarter and a recent high of 80.0% in the second quarter 2013 when the CFVI was at 46.67. Insights into consumers’ financial positions help policy makers determine the extent to which economic growth and government programmes translate into improved financial stability of consumers.