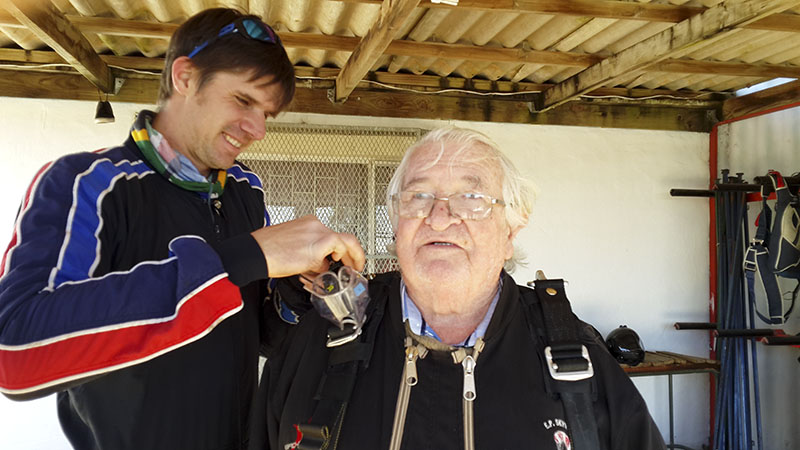 When Brookshaw resident Duncan Greaves turned 80 recently, he decided to celebrate in high style – by jumping from 10 000 feet. The jump at the EP Skydiving Club, with tandem instructor Gerrit van Zyl, was to raise funds for the home’s frail care centre.

Brookshaw residents turned out in full force, teasing Greaves as he prepared for his jump.

“Have you been to the toilet!”

And son James joked, “Dad have you updated your will?”

“Not at all!” he told Grocott’s Mail as he got kitted out in a fetching black jumpsuit. “Not in the least.

“I’ve flown all my life, doing aerial photography, so heights don’t bother me.”

The only slight worry was landing – and indeed, as he landed with Van Zyl, there was a moment of worried silence until the gathered supporters saw some movement.

“Are his legs okay?” someone asked.

But the only injury was a slight graze on his hand as he put out his hand on landing.

“I told you skydiving was dangerous,” quipped Joos Vos, who had accompanied Greaves 10 years earlier for his first jump at the age of 70.

There was a competition for guessing the time it took from leaving the aircraft to landing on the ground and the winner will be announced in next week’s Grocott’s Mail. Pick n Pay has donated the winner’s voucher.