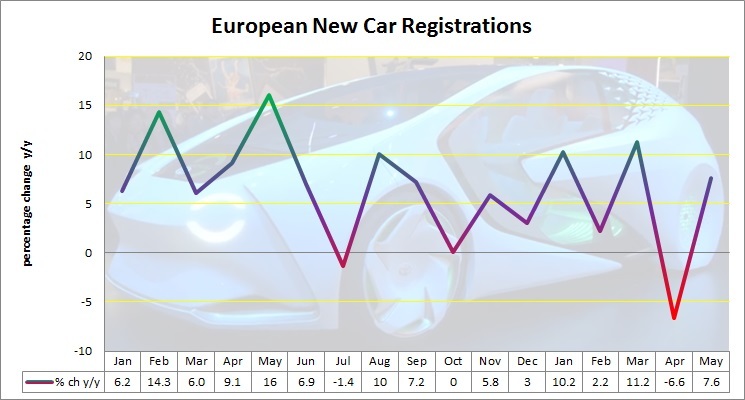 The European Union (EU) new car market saw registrations rise by 7.6% year on
year (y/y) in May to 1,386,818 units. In volume terms, this result comes close to
May 2007 levels, just before the economic crisis hit the European auto industry,
which bodes well for the platinum price.

This is because European demand accounts for just over a third of global
platinum demand for use in autocatalysts, even though the region produces less than
a quarter of worldwide new cars. This disparity is because the Europeans have
stringent emission standards that require higher platinum loadings in the
autocatalysts.

The essential part that platinum group metals (mostly platinum, palladium and
rhodium) play in cleaning up the environment is reflected in the fact that,
according to the European Automobile Manufacturers’ Association, one car in the
1970s produced as many pollutant emissions as 100 cars today.

This means that the average car engine emits 28 times less carbon monoxide
than 20 years ago with 71% of new cars in 2012 emitting less than 140g of carbon
dioxide per kilometre, with more than half of those emitting less than 120g. Pollutant
emissions from trucks have been slashed to near-zero levels and are now 98% less
than in 1990.

The five big EU markets performed very well in May with the exception of the
United Kingdom (UK). Germany was the top performer with a 12.9% y/y jump, closely
followed by Spain (11.2%), France (8.9%) and Italy (8.2%). The UK market suffered a
8.5% y/y decline, as a weaker pound following last year’s Brexit vote made imports
more expensive.