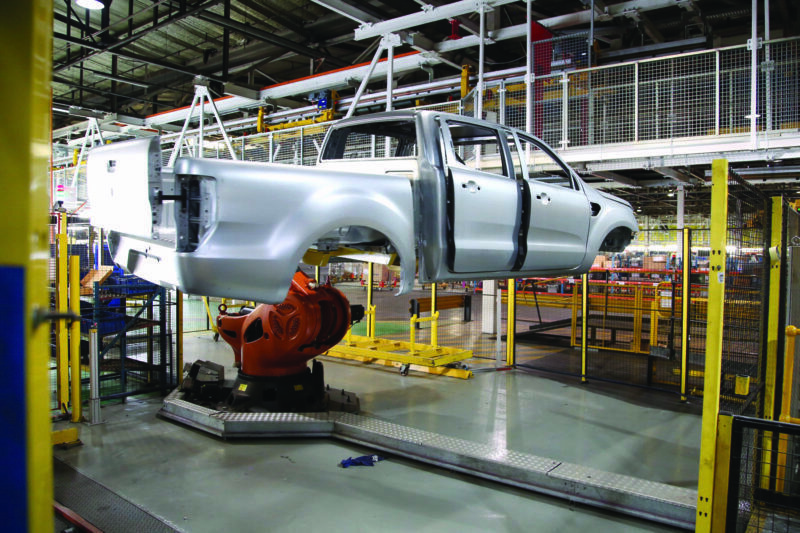 Ford Motor Company of Southern Africa (FMCSA) has invested more than R125-million at its plant in Pretoria. Photo: Quickpic

Ford Motor Company of Southern Africa (FMCSA) has invested more than R125-million to upgrade the 3 000-metre vehicle conveyor system at its Silverton Assembly Plant in Pretoria in order to increase its production capacity of the locally-built Ford Ranger and Everest.

The investment is part of Ford’s manufacturing expansion plans to increase the plant’s capacity by 22% from 27 jobs-per-hour to 33 jobs-per-hour by January 2018, following the move to a two-vehicle facility last year when the Ford Everest joined the Ford Ranger on the Pretoria assembly line.

The new conveyor system, which began operating earlier this year, optimises the plant’s automated Electro Monorail System Webb conveyor between the body shop and paint shop, thereby improving overall production efficiency by reducing stoppages. This means fewer delays in production and an increase in the number of vehicles manufactured for the South African market, as well as for export to 148 markets in Europe, the Middle East and Africa.

An additional benefit of the new system is that the conveyor decouples the Body Shop from the Paint Shop, which allows one area to continue work should the other have a stoppage. The new conveyor has also created a buffer zone between the two areas, which allows for last minute body-panel adjustments and repairs to be made before the vehicles enter the Paint Shop.