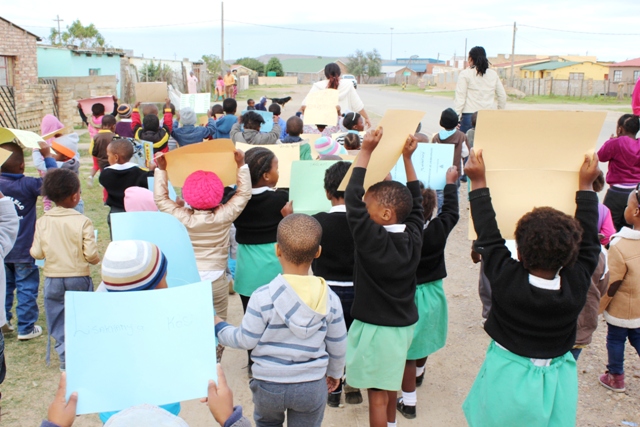 As a national child safety awareness campaign launched this week, a Grahamstown teenager said a voice recording about would-be abductors outside her Grahamstown school on Friday was nothing more than a prank among friends. The Whatsapp voicenote went viral last weekend. Meanwhile, police confirmed no case of kidnapping or abduction has been reported in Grahamstown since rumours about predatory men in a grey Polo began and have urged the public to resist spreading unconfirmed reports.

On the eve of Child Protection Week, a voicenote was widely circulated in Grahamstown last week in which “Zanele”, purportedly a pupil at Nathaniel Nyaluza Secondary School, describes a near-kidnapping in Dr Jacob Zuma Drive opposite Fingo Square. “Akhona” says in another voicenote, apparently in response, that he’s a former Nombulelo Secondary school pupil and that “Zanele” is his girlfriend. Both appear to be hoaxes.

The rumours gathered speed last Friday, 19 May, when a post on social media warned that men in a silver VW Polo with Gauteng registration plates was abducting women and children. The post appears to have originated in Kimberley. It quickly went viral, in a form that specified no location or time, which meant when Facebook users shared it within their networks, it created the impression the information might be both recent and local.

Elements of the rumour included:

In Grahamstown last week, parents, teachers and social workers became concerned about children’s safety as three voicenote messages referring to Grahamstown went viral on the back of the circulated images, some sharing the warnings with children in their care.

In the first recorded message “Zanele” who says she is a Nathaniel Nyaluza pupil, describes how she  narrowly escaped being abducted by four men in a grey Polo on the corner of Dr Jacob Zuma Drive and Albert Street. In the second message, a man who calls himself Akhona, says Zanele is his girlfriend, that it was him in the grey Polo and there was nothing wrong. In a third message, Nombulelo Secondary School pupil describes how she was waiting for transport outside her school on Friday, when a grey Polo approached,  and she too narrowly evaded being abducted.

Grocott’s Mail accompanied by the Masifunde Education And Development Project Trust’s Ayanda Kota, on Monday visited Nathaniel Nyaluza Secondary School, where both principal Zak Tyala and deputy Mahlatu Diko were familiar with the rumours and the voicenotes.

Tyala said, “I heard the voicenote and we did our investigation. We went from class to class and checked the registers. We don’t have that Zanele here at school.”

He said none of the pupils had reported any incident of being accosted by strangers. “We’ve had no reports like that,” Tyala said. “Nothing. And the children would definitely tell us if there was such.”

At Nombulelo Secondary School, a Grade 10 pupil was shocked to hear that her message, recorded as a prank among friends, had gone viral, fuelling a belief that abductions for the trafficking of women and children were happening in Grahamstown.

In her voicenote, the girl, 16, said she’d been waiting for transport outside Nombulelo with a friend, when a grey Polo approached. She then describes a narrow escape.

Grocott’s Mail spoke to the pupil with the permission of her mother, as well as principal Nicci Hayes. When Grocott’s Mail played the message to her, she confirmed she had recorded it and was visibly shocked to realise that what she described as a joke among friends was being shared in seriousness across the town.

“No, it’s not true,” the girl said. “We were just joking with my friends.

“Me and my friends in this Whatsapp group, we heard this message from ‘Zanele’ and we decided it was fake, and so we started laughing and chatting about it.”

As part of that conversation, the girl had recorded her own fake tale to share among her friends, identifying herself so they would realise it was a joke.

“I never thought it would go that far,” she said.

Hear her explanation and apology here (her name has been edited out of this voice recording):

Hayes said she was proud of the pupil for speaking honestly and openly.

“It was an easy mistake to make,” Hayes said.

“However, I add my voice to note that the spreading of rumours is serious. While we must always be careful and alert to our surroundings, unfounded fears are not helpful,” Hayes said.

Hayes has welcomed an offer by Thetha Uvakale of the Upstart Youth Development Programme, with the support of the Rhodes University School of Journalism and Media Studies, to speak to pupils during assembly on Monday about the do’s and don’ts of social media.

It was Masifunde’s (and the Unemployed People’s Movement’s) Kota who spoke to residents of Lukwe Street, the supposed address of “Akhona”, the man who claimed to be the boyfriend of “Zanele”. Grocott’s Mail . Several people said they knew of no one of that name living in the area. Most people questioned laughed and said they’d heard the voicenotes and were sure they were fake.

Kota’s interest in the issue was as a social activist. He said, “We saw how rumours in 2015 were allowed to grow, and helped create conditions for the October 2015 xenophobic attacks. An atmosphere of fear and mistrust creates the ideal space for criminals to operate.”

The South African Police Service confirmed this week that no case of abduction, or attempted abduction of any woman or child had been reported at either the Grahamstown or Joza police station since the original rumours began circulating.

The rumours went viral during the lead-up to national Child Protection Week, 27 May to 2 June.

HOAXES ARE NO JOKE

“The fact that they are a popular choice for hired cars also explains why there would be out-of-town registration plates that vary, rather than that criminals keep swapping the plates,” Govender said.

However, hoaxes were serious, she said.

“An allegation may be a hoax, but we can’t treat it as such,” Govender said. She said members of the public need to be responsible in reporting incidents.

“Every case requires SAPS resources,” Govender said. When a false report is made, it takes aways police resources from where they are most needed.

“Before you report something to the police, and especially before you share something on social media, make sure you have the facts on hand,” Govender said.

“Don’t report something as fact that you have heard only through the grapevine, or through social media.”

Other useful information is available for parents / caregivers, educators, children and youth on the Childline website: www.childlinesa.org.za

Previous ArticlePrisoners escape from court
Next Article Be vigilant and back up, warn IT experts