Movies at the Monument next weekend 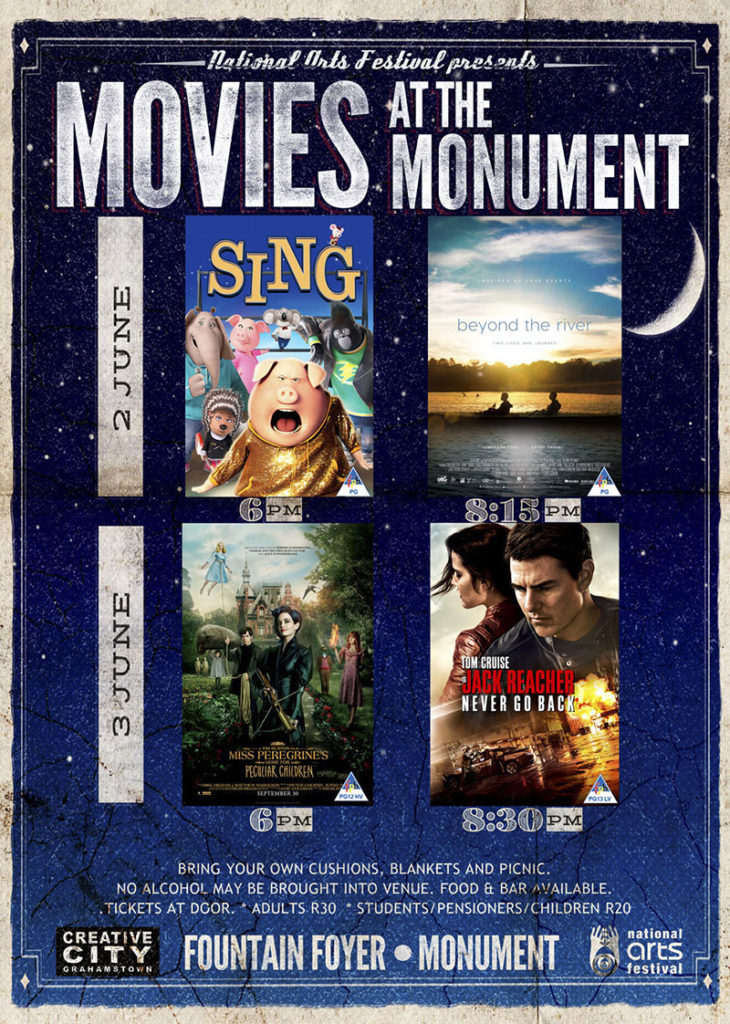 With the evenings getting cooler, Cinema under the Stars has moved indoors. Take your families to the Monument on Friday 2 and Saturday 3 June from 6pm to enjoy a night out at the movies.

No alcohol may be brought into the Monument, say the organisers, but the Shakespeare Pub will be open and selling Featherstones beer and a variety of wine. The Café will sell hotdogs, pies and soup, plus cold drinks, sweets, chocolates and crisps.

Movies will be screened in the Fountain Foyer. “There will be cushions on the steps – but bring extra padding for added comfort,” advises organiser Kate Davies.

Tickets are R30 for adults and R20 for children, students and pensioners. Block bookings can be made by contacting Davies at 046 603 1163 or emailing kate@nationalartsfestival.co.za.

TAKE A CHILD TO THE MOVIES
The National Arts Festival would like to invite 40 children in Child Welfare care to join them on Friday night – if you’d like to help us sponsor their evening – please contact kate@nationalartsfestival.co.za or 046 603 1163. Sponsorship per child costs R70 – this includes supper, transport and a movie ticket.
“The children absolutely love the opportunity so please help us to spread the joy,” says Davies.

THE MOVIES
Friday 2 June 6pm
SING (PG-A)
Koala bear, Buster Moon, presides over a once-grand theatre that has fallen on hard times. An eternal optimist, and a bit of a scoundrel, he loves his theatre above all and will do anything to preserve it. He takes one final chance to restore the theatre to its former glory by producing the world’s greatest singing competition. Five contestants emerge: a mouse, a timid elephant, a pig, a gorilla and a punk-rock porcupine.

Friday 2 June 8.15pm
BEYOND THE RIVER (PG 7-9)
A poor boy from rural Soweto finds new meaning to life through canoeing as he and his unlikely partner overcome personal differences and challenges to form a strong bond and tackle the legendary Dusi canoe race. Inspired by the true story of Siseko Ntondini and Piers Cruickshanks, who together won gold in the 2014 Dusi, Beyond the River delivers a nail-biting adventure story about the triumph of the human spirit.

Saturday 3 June 6pm
MISS PEREGRINE’S HOME FOR PECULIAR CHILDREN (PG13)
When his beloved grandfather leaves Jake clues to a mystery that spans different worlds and times, he finds a magical place known as Miss Peregrine’s School for Peculiar Children. But the mystery and danger deepen as he gets to know the residents and learns about their special powers – and their terrifying enemies. Ultimately, Jake discovers that only his own special peculiarity can save his new friends. Based on the novel Miss Peregrine’s Home For Peculiar Children, written by Ransom Riggs.

Saturday 3 June 8.30pm
JACK REACHER: NEVER GO BACK (PG13)
Investigator Jack Reacher (Tom Cruise) springs into action after the arrest of Susan Turner (Cobie Smulders), an Army major accused of treason. Suspecting foul play, Jack embarks on a mission to prove that the head of his old unit is innocent. After crossing paths with the law, Reacher must now go on the run to uncover the truth behind a major government conspiracy that involves the death of US soldiers.