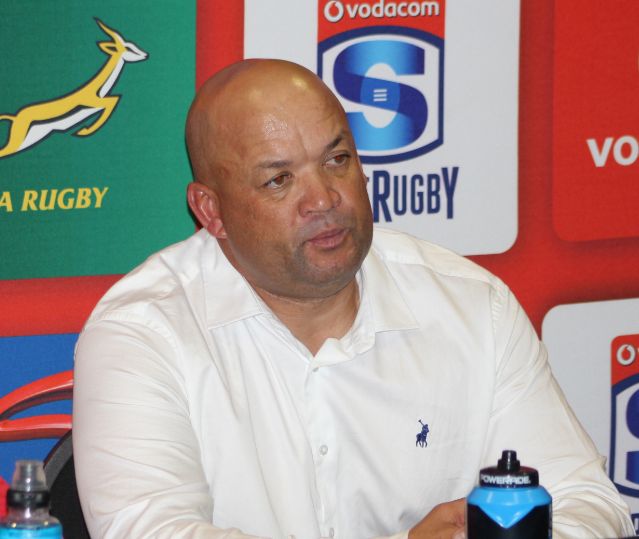 Even Deon Davids, a man renowned for his immutable passivity, allowed himself a tiny smirk when quizzed by the press on his Southern Kings side’s colossal 35-32 victory over the Sharks on Saturday. The win came off the back of a solid physical display, that saw the Kings forwards match their more fancied opponents from the onset, as well as a 78th-minute try by super-sub, Pieter-Steyn de Wet.

At the post-match press conference, Davids heaped the praise on his men. “The boys showed a lot of character to keep on fighting towards the end. It’s not always talent that wins you games; sometimes it’s the spirit of the guys that are playing. The guts, belief and willingness we showed to get over the line tonight was very special.”

Davids highlighted the hard-fought nature of the win (which saw the Kings fight back from behind, and even relinquish the lead on several occasions). He claimed that it would stand them in good stead for the future.

“I always believed. There were a number of opportunities where we could have added to the score-line, but I think it was worthwhile to win it like this. It would also have given the players another perspective about what they can do; not just by winning or running away with games but by coming from behind and gutsing one out against a very good side,” he said.

The past few weeks has seen a massive effort from the Kings to advertise and promote the #FullOurStadium campaign – a bid to gather greater support for this gutsy outfit (as well as piling even more pressure onto SARU to include them in next year’s tournament). Yesterday, 22 000 people turned out to watch the win in what was perhaps the greatest atmosphere experienced at the Nelson Mandela Bay Stadium since the Kings’ inclusion in Super Rugby. Davids reflected on what it meant his charges: “I must say a big thank you for everyone’s support, to the media and all the people of Port Elizabeth. You can clearly see in that last five-minutes the support meant a lot to us and helped us over the line.”

Captain, Lionel Cronje echoed his gaffer’s words. “This has just been a phenomenal day. Home-ground advantage should never be underestimated; it was just awesome to have the support we had tonight. It was awesome to come out and play in such a fantastic stadium, we really could feel the buzz on the field. It certainly helped us over the line.”

Sharks coach Robert du Preez cut a very dejected figure after his side’s loss, but he admitted that the Kings did deserve the win. “Obviously it was very disappointing for us, but we can’t really have any complaints. We got outscored four-tries to two, so I think that sums it up.”

Du Preez could not confirm the extent of captain, Pat Lambie’s injury, after the Springbok fly-half failed to reappear at the start of the second-half. Lambie took a hard knock to the head in the first forty, which will leave his coach extremely concerned; especially considering the 26-year-old’s history with concussion.

The Natalians next travel to Singapore for a dual with the Sunwolves, while the Kings will welcome the Brumbies to what is sure to be another sold-out Nelson Mandela Bay on Saturday.