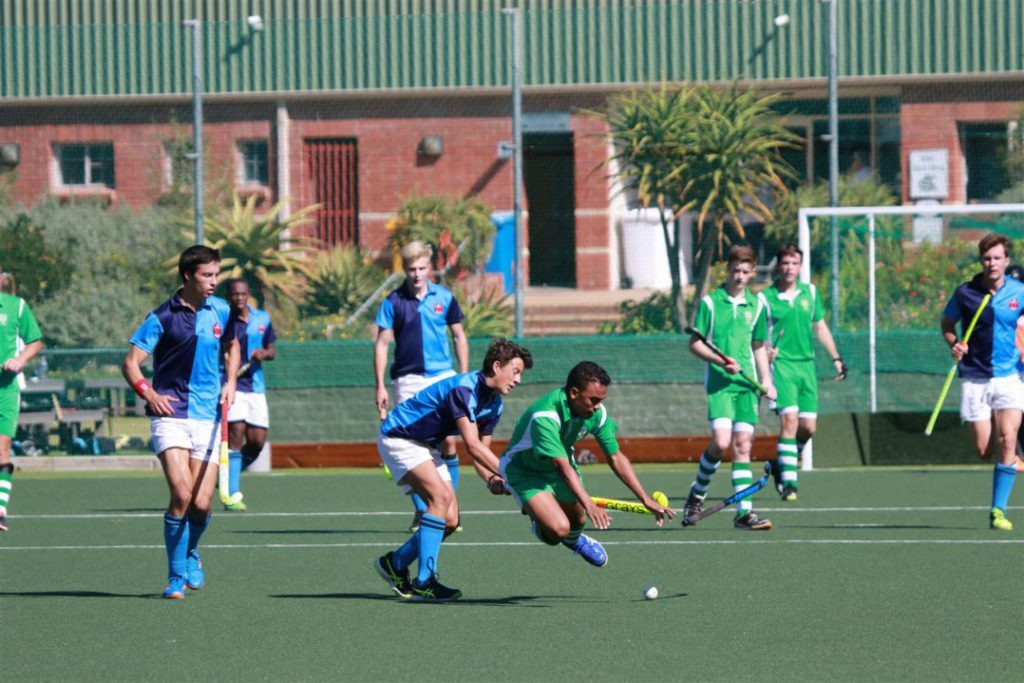 The St Andrew’s College hockey teams were active during the recent school holiday’s, taking part in various festivals around the country.

The St Andrew’s U14A side played in the Independent Schools Hockey Festival hosted by York High School over Easter. Against Clifton College, the first half was evenly contested but St Andrew’s were slightly better in the second half scoring on one of their opportunities. Although Clifton pressed for the equaliser, the St Andrew’s defence held firm, as St Andrew’s took the win.

The following matches saw St Andrew’s being tested by the strength of both Michaelhouse (lost 1-2) and St Andrew’s School, Bloemfontein (lost 0-1).

The match against St Charles was entertaining, but also showed that the team needed to apply their discipline until the final whistle. Having deservedly gone 3-1 up, and controlling the match against a good team, St Andrew’s made a few defensive errors in the last five minutes to concede two goals and draw the match 3-3.

St Andrew’s U16A attended the Independent Schools Hockey Festival held in Cape Town at Bishops from 26 to 30 April. The side faced St Alban’s in their first game, winning 5-0. The following day they beat Penryn 5-0, before losing to Michaelhouse 1-2 in a good and tightly contested game in which Michaelhouse scored in the last minute to decide the outcome.

St Andrew’s then played Somerset College on day 3, but were unable to keep the high standard of play of the previous matches, losing 1-2.

On the final day and in the last game of the festival, St Andrew’s played the hosts Bishops. St Andrew’s played some of their best hockey at the tournament and went one goal up in the first half. Bishops then equalised with about 8 minutes left after which there was a period of high intensity play from end to end in which either side could have scored. The final score ended 1 – 1.

St Andrew’s 1sts travelled to Gauteng for the annual Saints Easter Hockey Festival. Despite careful planning around the timing of the trip, a lengthy delay at the Port Elizabeth airport caused the side to arrive at Saints with only 50 minutes to spare before the scheduled starting time.

The side won their first game against Westville. The teams traded goals, going into the final minutes with the score deadlocked at 3-3. St Andrew’s displayed superior fitness and composure, and with little time left on the clock scored the winning goal and got the festival off to the best possible start.

St Andrew’s faced Michaelhouse and Parktown Boys on Day 2. The Michaelhouse fixture was a thriller with both teams playing exciting hockey. Michaelhouse took a 2-0 lead early in the first half but St Andrew’s pulled one back in the last minute of the half. The Grahamstown side dominated the second half using “high press” very effectively, and counter attacking at pace. The match was locked at 2-2. In the last 20 seconds St Andrew’s turned the ball over deep in their half, went the length of the field and won a short corner with just six seconds remaining in the game. The Michaelhouse goalkeeper made an excellent save from Luke Hobson’s drag flick but Peter Jarvis stepped in and scored a memorable winner, St Andrew’s triumphed with 3-2. After a slow start in the evening game against Parktown (St Andrew’s were 1-2 down) the side played some scintillating high-paced hockey winning 6-2.

In their last two fixtures against KZN teams, Glenwood and Clifton. Having once again fallen 2-0 behind against Glenwood, St Andrew’s were unable to turn the score around, losing 1-3.

The final game was against Clifton. With 15 minutes to go St Andrew’s were 2-0 up. Due to injuries, the side was down to just two reserves, and also only had a two-hour break between matches.

Clifton were relentless in attack and with 2 minutes left on the clock they found the equaliser 2-2.

They then beat Parel Vallei 4-0, before losing their third match to Woodridge 1-2.

St Andrew’s conceded two early goals. Although they dominated the possession and territory in the second half, they could not penetrate the Woodridge goal for the equaliser.

A tough encounter followed that afternoon against a well-structured and physical Glenwood House team which the Four Squares outplayed their opponents in most departments, but had to work hard for their deserved 2-1 win.

The final match against Stirling High School saw an emphatic display by the St Andrew’s side who had been thwarted by the Stirling keeper earlier in the season. The team scored an impressive 9-0 victory with goals coming from all parts of the D to finish a tough festival on a high.