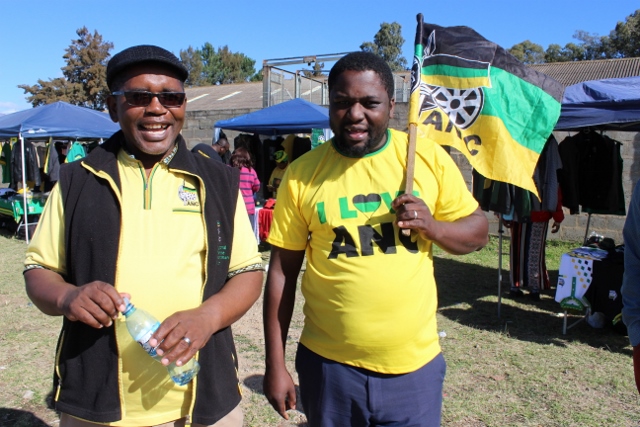 “We want our love back,” ANC Deputy President Cyril Ramophosa told a warm and receptive audience at the Indoor Sports Centre in Joza yesterday. “Like a lover who has done something wrong, we must try to win South Africa back.”

He was definitely on a mission to court his Grahamstown audience.

“Makana must be properly resourced,” he told the 2000-odd supporters who filled the centre to capacity, with outdoor speakers broadcasting proceedings for those who couldn’t squeeze in. The municipality’s financial crisis is openly referred to in Council meetings and documents. Further hitting home on an issue with particular relevance days after Makana declared the municipality’s water situation to be a disaster, he said, “This municipality is having to deal with 200-year-old infrastructure that must be revamped and it must get the funds to do that.”

Again speaking directly to the heart of a town surrounded by farmland, Ramaphosa said rural areas must become economic hubs. He spoke of policies being implemented by Minister of Rural Development and Land Reform Gugile Nkwinti to that end.

“Agriculture must be developed and supported,” Ramaphosa said.

Crucial to creating growth through agriculture, he said, was resolving the land question.

“There must be a solution to bringing the land back to the people. People must get the land back, so that they can work the land, supported by the government.”

Referring to the impact of Rhodes University in Grahamstown, Ramaphosa said he wanted students to succeed.

“We want them to gain the expertise they need so that they help this government to develop South Africa,” he said.

He joked about the presence of Rhodes University Vice Chancellor Dr Sizwe Mabizela on the stage at the Joza event.

“We saw fit to capture him,” Ramaphosa said.

Ramaphosa said the country was entering its second phase of liberation.

“This time around we are embarking on a journey of radical economic transformation for all,” Ramaphosa said. “It is a journey towards inclusive growth.”

The Freedom Charter principle that the people must share the country’s wealth was the basis of this journey, he said.

But while drawing a line in the sand that places him firmly on the side of the revived radical economic transformation rhetoric, Ramaphosa simultaneously slammed the racialisation of current discourse.

Insisting that the party was returning to its non-racial roots, Ramphosa said, “The ANC is not divisive.”

Slamming factionalism within the party, he said, “The opposition parties are working to form a formidable coalition. The ANC must build a formidable unity.

“We must avoid divisive language, and we must be prepared to debate issues.”

Without naming anyone, he said, “The government must not be against the people. It must not be captured and it must not promote the interests of certain individuals.”

Acknowledging the bruising the party received in last year’s local government elections, Ramaphosa said, “Our past supporters punished us with their vote. For 2019, the ANC must unite so that they support us again to win decisively.

“We want our love back,” he quipped.

“Let us go like a lover who has done something wrong, apologise and ask for our love back,” he said.

The event followed one in Rhodes University’s Barratt Lecture Theatre, aimed at the town’s academics and professionals. While security was tight, with monitored access control, the atmosphere was festive, with many either arriving in bright ANC regalia, or stopping to get equipped at several vendors outside the venue.

While local ANC leadership was adamant that Ramaphosa’s invitation to Grahamstown should not be seen as a stamp of approval by the party’s Sarah Baartman region ahead of the party’s upcoming elective conference, Nehawu, which had a strong presence at both the Joza event and the earlier one at Rhodes, was hiding nothing.

Secretary of the ANC’s Makana Subregion Andile Hoyi said the nature of the local ANC politics was more peaceful than in other parts of the country.

“Here in Makana we can find each other,” Hoyi said. He said there had been no decision yet about leadership.

“When the time is right, our branches will discuss leadership openly,” Hoyi said.

He compared Ramaphosa’s visit to the recent stopover by secretary general Gwede Mantashe.

“His was a similar visit. This is not the first or the last time the [ANC] NEC or PEC engages with the local structures.

“We are supporting Ramaphosa in his role as the ANC’s deputy president. There is no [elective]conference agenda here.”

Ward 13 branch chairperson Mzukiisi Mali insisted the event was no more than a cadres’ forum.

“The ANC branches have not yet opened the debate,” Malli said. “It is premature to discuss who the subregion or region is backing.”

National Education, Health and Allied Workers Union of SA (Nehawu) members were there in their numbers, easy to spot in their red T-shirts. Secretary of the Fort England branch Thanduxolo Plaatjie said in line with the union’s national policy, the local branches were firmly behind a campaign to instate Ramaphosa as the party’s president.