When science becomes an art 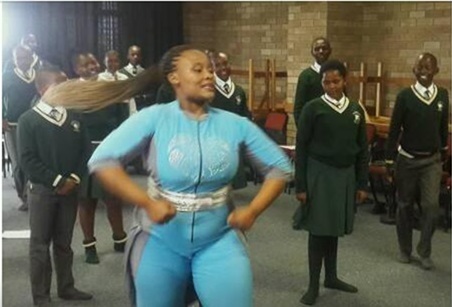 Back in high school, science was always my greatest nemesis, so when the time came to choose, I gladly traded in the science labs for the stage.

When the science kids skipped off to their physics classes, the remainder of us ‘arty-farties’, danced all the way to the drama room for Dramatic Arts.

Coming from that background of subject segregation, I would never have thought it possible to experience the absurdity of being reintroduced to a drama theorist in a science workshop. That was until Scifest 2017.

Where the Science meets the Arts is a workshop exploring how science concepts can be depicted and explained through performance arts, particularly movement and dance.

Thandiwe Sekhibane, who is currently completing her doctorate on using the Arts to communicate scientific concepts, has enough enthusiasm and energy to get you up on your feet and dancing in the name of science.

Sekhibane takes you through a lesson of chemical bonding using the drama and movement theorist Rudolf Laban’s Movement Analysis (which every performance art student is familiar with).

“Chemicals bond everything, from the air we breathe and the clothes we wear to the hair and beauty products we use,” she explained, emphasising that science is all around us, and that she is a firm believer in using artistic forms to demonstrate it.

Students are divided into small groups and given the task of choreographing dance moves using Laban’s movement theory, to explain the different chemical compositions of solid, liquid and gas particles.

At the end of the session, each group performs their dances which prove to be both very entertaining and educating.

Sekhibane is the founder of the Nna leBokamso Science and Arts Academy that she will be launching on 27 May this year.

The academy is based on her doctoral research and carries her vision of enabling students to learn science through artistic pursuits.

Her interest in this phenomenal educational platform springs from her passion for dancing, which she pursued until the end of matric.

Although she dreamed of studying towards a degree in performance arts, due to financial constraints, a science degree was the only opportunity made available to her to further her education.

When it came to deciding on a path for her doctorate, she finally came up with the perfect way to merge her two passions.

“I still really wanted to do something with dance, so I figured, why not try and marry the two,” Sekhibane explained.