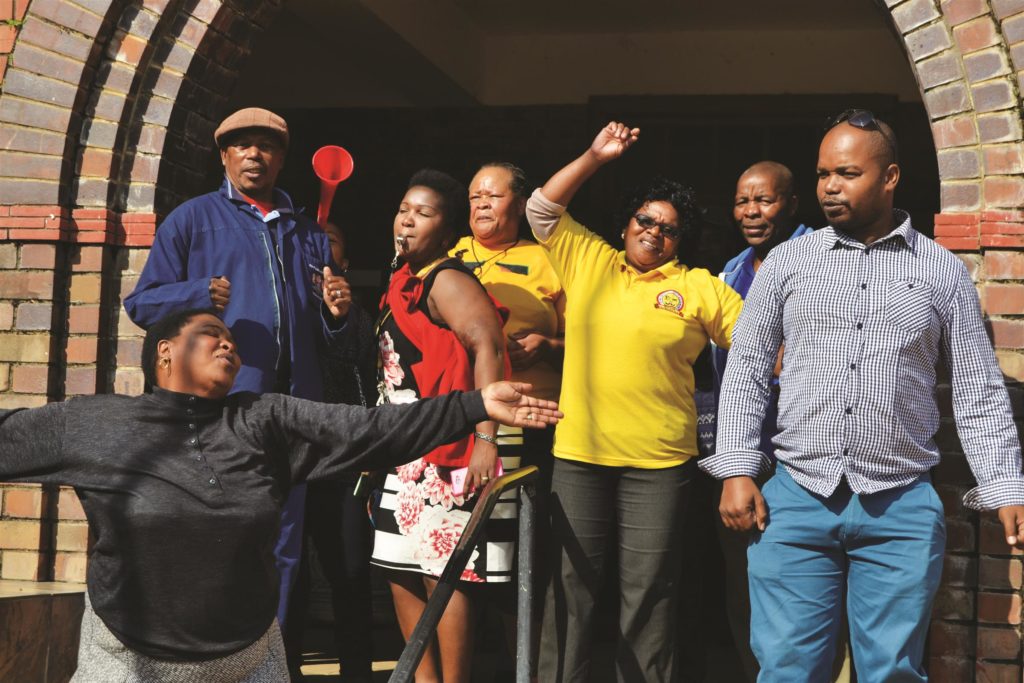 Fort England hospital staff protest in front of the main entrance to the hospital on Monday 5 September 2016, following CEO Dr Roger Walsh's return to work. The employees returned to work around 1pm after Walsh left the hospital. Photo: Anele Mjekula

A group of Fort England employees have vowed to protest until CEO Roger Walsh is permanently removed  from the hospital.

Walsh reported for duty on Monday after an absence of just over a month, pending the report on a follow-up investigation into allegations by employee unions against the hospital’s management.

The CEO’s return to the institution sparked a protest from employees who are still waiting for the latest report.

In July the Eastern Cape Department of Health asked Walsh to leave his post after a string of protests at Fort England. The instruction came four days after the delivery of the report on the primary investigation conducted by advocate Amelia da Silva.

Da Silva was appointed through the Office of the State Attorney, in turn commissioned by the Eastern Cape Department of Health.

The findings of the report, commissioned in April and dated 8 July 2016, were presented to organised labour at Fort England on Friday 15 July.

Grocott’s Mail has not seen the report or the allegations it investigates, but in the summary findings Da Silva says she found no evidence to support allegations against the hospital’s senior administration of mismanagement, corruption or negligence, nor that disciplinary procedures were flouted.

In response to questions from Grocott’s Mail regarding the latest events at the hospital, health department spokesperson Siyanda Manana confirmed that one of the recommendations of the first report was to have an internal expert come and have a look at what was happening at Fort England.

That second investigation is still not complete, according to Manana.

“Once we’ve wrapped it up, we will present it to stakeholders. For us, the sooner we do it the better. We have no date yet, and I doubt it will be this week because there are still several issues that have not been addressed. But we are focusing our attention on finalising it.”

Manana said the first report is not yet available to the media or the public because there are issues contained in it that are subject to further discussion .

Objecting to the first report’s findings, union leaders called on members of Nehawu, the Democratic Nursing Organisation of South Africa and the National Union of Public Sector and Allied Workers to bring the hospital to a halt.

A memorandum from divisional and clinical managers at the hospital dated 19 July and addressed to Dr Thobela Nogela (deputy director-general, human resources) and Dr Litha Matiwane (deputy director general, health services cluster) alleged that violent threats to forcefully remove Walsh and burn down the hospital were made at the 15 July meeting.

The meeting was followed by several days of industrial action.

On Tuesday 19 July, managers reported “ongoing industrial action, widespread intimidation, forced removals of staff from wards, offices and essential services and threats of violence to clinical staff who were attempting to prepare food in the kitchen and dispense medication in the wards”.

Speaking to Grocott’s Mail on Tuesday 6 September Nehawu branch chairperson Thando Mtshalala said Walsh left on Tuesday after receiving an email from the provincial office informing him that he should leave the hospital until further notice.

“We have resumed duties from yesterday (Monday). We are disciplined. We want to work – but we will never work under Dr Walsh,” he said.

Mtshalala said they were expecting to receive the final report by Friday 9 September.

“We are still waiting for the second report. They said they were presenting it to Bisho officials yesterday, 5 September and we thought we would get it today, but they will inform us when they are ready to give it to us. The D-day on which we were expecting the report was 9 September,” he said.

Mtshalala told Grocott’s Mail that regardless of the outcome of the second report they stand firm on their position that they will not work under Walsh’s leadership.

“We will continue with our action until Walsh leaves otherwise we will continue to be victims. We don’t care about any outcomes of any report. We don’t want Walsh and that’s the bottom line,” Mtshalala said.

Speaking to Grocott’s Mail on Tuesday, Walsh said the hospital’s efforts to obtain an interim court interdict on Monday (to prevent strikers from interrupting services) had not been supported by head office.

“This left us at the mercy of a small group of aberrant employees,” Walsh said.

“We are being hamstrung and undermined. I left to ensure patients got fed, the SAPS could stand down and damage did not escalate.”

Walsh expressed the hope that the Department of Health would deliver the second report sooner rather than later and assist them to manage the institution procedurally.

“Currently, it is anarchy.”

Walsh said he had been informed that the second investigation was complete. He said it addressed the same allegations as the previous one, conducted by Da Silva.

The concerns raised by the unions included a number of internal issues between management and the workers.

One employee, who spoke on condition of anonymity during the initial protests in July, said, “He (Walsh) is arrogant.

He takes decisions without consulting. It’s his way or no way.”

Also during the July action, Nehawu shop steward Phakamisa Soxujwa said that:
* There are cases when (an employee) will be operated on and have to return to work the next day;
* There are unfair labour practices. We have been following grievance procedures but these take time.
* People have been resigning and taking transfers because they are unhappy;
* Patients haven’t had new clothes, but money was spent on fencing, and renovating the (on-premises) house for one of the managers to live in;
* At (management) meetings we were told that the unions were observers, not (decision makers). On other occasions we would reach a decision, only to find that a different decision had already been taken and/or implemented.

Soxujwa said, “This is our last resort. We have engaged with the department since 2014.”

Denosa member Ntombizodidi Ngcosini said, “This (unhappiness) has been a long-standing problem since 2014. It is the culture of our employer that they don’t take people seriously.

“We have been crying for a long time.”

Another employee, speaking on condition of anonymity, also laid some of the blame at the department’s door.

“This situation is beyond what Fort England can manage,” the employee said. “It needs decisive leadership (from the Province) to resolve this.

“Look, Roger Walsh might not be popular, but he is the best CEO the institution has had for a long time.”

Of this week’s action, Walsh said, “At least yesterday, (Monday) no health professional was involved in illegal action and patients received the best care, except for a late lunch.”

However, he was very critical of the actions of union leaders.

“Seeing the small group of strikers threatening and intimidating fellow workers and letting off fire hydrants was depressing, as they were encouraged by so-called union shop stewards, who are supposed to be responsible for ensuring harmonious and safe working conditions for all their members,” Walsh said.