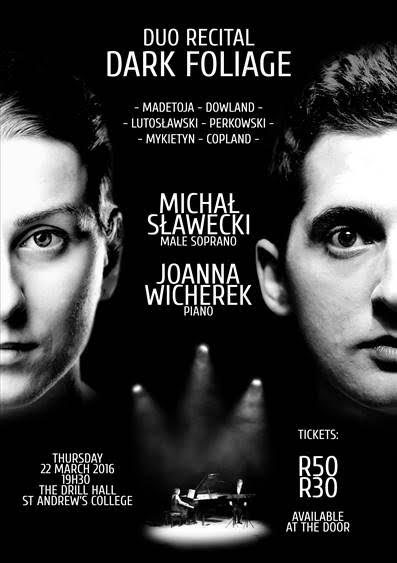 Both musicians are no strangers to Grahamstown and have performed to great acclaim at the National Arts Festival. Joanne lives in the city and teaches piano here when she's not touring.

Here's some more information about Joanna and Michal.

Joanna Wicherek is an accomplished classical pianist performing internationally with many renowned artists. 2014 she was awarded Standard Bank Ovation Award at the National Arts Festival, South Africa. Her extensive repertoire has an emphasis on contemporary music.

She also has a profound understanding of Historically Informed Performance and specialist knowledge of historical keyboard instruments.

Wicherek professionally collaborates with Poland’s two most important composers Paweł Mykietyn and Paweł Szymański. She performed Szymański’s music on the soundtrack to the filmViolated Letters (2010). In 2003 Wicherek recorded a CD with the early music ensemble Proavitus, contributing harpsichord and singing parts.

Wicherek has been awarded prizes at the Competition of the 20th and 21st Centuries for Young Performers, Warsaw and the International Competition of Contemporary Chamber Music, Krakow. Joanna is a Young Artist of a prestigious Accademia Villa Bossi in Italy.

At the moment she resides in South Africa where she is active as a concert pianist and and piano pedagogue.

Michal Slawecki is a graduate of the Vocal Department at Fryderyk Chopin Music University in Warsaw in the class of Artur Stefanowicz, under whose vocal supervision he remains until today. Already as a student, Michał Sławecki made his debut in Castle Opera in Szczecin as Prince Orlovsky in Strausses "Fledermaus" and in Collegium Nobilium Theater in Warsaw as Neron in Monteverdi's "l'Incoronazione di Poppea".

In the following years of his professional career he performed in such locations as: the National Philharmonic in Warsaw, Philharmonic in Szczecin and Gdansk, Silesian Opera in Bytom, Polish Theater in Warsaw, National Opera in Warsaw, Opera Nova in Bydgoszcz, Castle Opera in Szczecin, Theater di Manoel on Malta. He performed with concert repertuar in Lituania, Latvia, Malta, Italy, France, Germany, Greece, Austria and Kazahstan. His broad repertuar covers various periods, from baroque to modern compositions.

He cooperates with such prominent polish composers as: Paweł Mykietyn, he performed his compositions in Rome "Corso Polonia X Edizione del Festival delle Arti Unite", on Malta "Teatro di Manoel Cocert of Polish Contemporary Music Masters", in Germany "POST FINE ARTS-Paweł Mykietyn Shakespeare's Sonnets (2000)" and in Lviv "XVII Internation Contemporary Music Festival"; Bartek Chajdecki, he performed in the prapremiere performance of his "Missa" in Baltic Philharmonic in Gdańsk with the Polish Baltic Philharmonic Orchester in Gańsk conducted by Piotr Sulkowski; Maciej Zieliński, Michał performed in Zieliński's concert "Kolęda Nova" with the AUKSO Orchester conducted by Marek Moś (the concert was registered by the TVP- Polish Television); Andrzej Zarycki, Mochał performed in the prapremiere performance of his "Golgota Polska" in Baltic Philharmonic in Gdańsk with the Symphonic Orchester conducted by Tadeusz Wicherek (concert registered by TVP).

On his account, Michał Sławecki has also CD recordings as well as radio and television appearances.

You can see some clips from recent NAFEST performances here https://www.youtube.com/watch?v=WKplGenCPag

Short videoclip from our concerts at the NAF