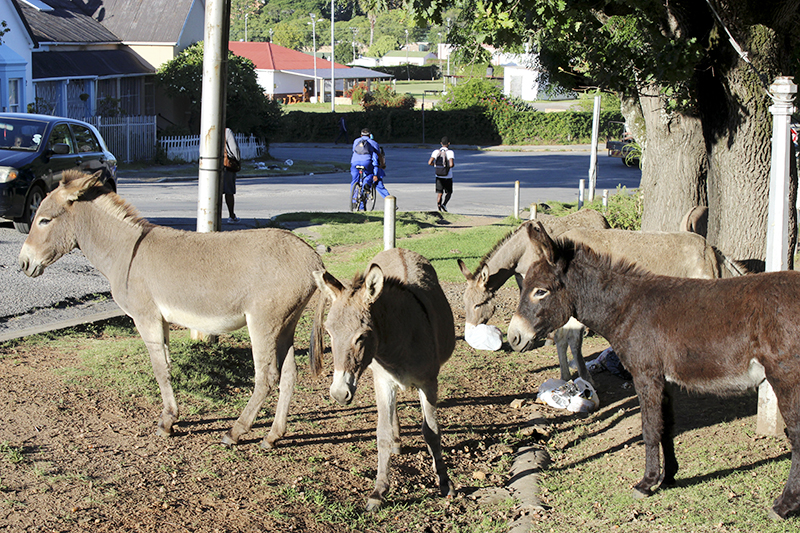 A gang of donkeys tears open rubbish packets on rubbish day. A Park Road resident says he’s noticed a tendency for some residents to put their rubbish on their street, where donkeys come and tear it open, leaving a mess on the verge. File photo: Sue Maclennan

By NATANYA MAINKA
Look out on Saturday, during the National Arts Festival parade, for a very special donkey cart – and some very happy donkeys. It’s normal to see donkey carts in Grahamstown, because many locals use them to transport goods and passengers.

Look out on Saturday, during the National Arts Festival parade, for a very special donkey cart – and some very happy donkeys. It’s normal to see donkey carts in Grahamstown, because many locals use them to transport goods and passengers.

It’s an affordable and environmentally friendly way of getting around but it’s not always so comfortable for the donkeys.

However, that is about to change. On Wednesday Grocott’s Mail visited a cart owner from Fingo Village, Malibongwe Donyeli, who has been in the donkey cart business since 2009.

He explained how his donkeys lives have improved in the past month after he started using the powerset donkey harness that has been introduced by the Farm Animal Centre for Education (FACE).

Jenny Copley of FACE said the new harness will make it easier for Donyeli’s donkeys to work more effectively.

She said most of the donkey carts used in sub-Saharan Africa have a single shaft attached to the donkey by means of a simple harness with traces and a neck yoke.

“Practical and academic research over decades had shown that the neck yoke system is uncomfortable for donkeys and that it prevents them from using their strength for effective traction.

The neck-yoke hitching system is the primary cause of the painful, and sometimes, crippling injuries suffered by donkeys in their daily work,” said Copley.

She said FACE has recently begun using a different hitching system which is designed by Peta Jones – a member of the NGO, ‘Donkey Power’, and author of Donkeys for Development.

Jones, an expert in animal traction, is now based in Zimbabwe.

Copley said the system is known as a Powerset.

She said it transfers the weight away from the donkey’s neck to the powerful shoulder structures and chest muscles enabling the donkey to pull the cart effectively and in comfort.

“The donkeys are able to lift their heads and engage their hindquarters properly for forward propulsion.

The system is humane and easy to use,” she said.

Donyeli explained that he has seen such a change in his donkeys since he started using the effective new harness.

“I have 10 donkeys and with the new harness I can use only two donkeys for the whole year.

“With the other old harnesses I was forced to change the donkeys every day because they were tired.

When I first tested the new harnesses, I went to the bush to cut wood and there was a huge difference.

Previously I had to help the donkeys by pushing the cart when it was fully loaded, but now they have enough energy to travel long distances,” said Donyeli.

Copley said that donkeys previously struggled so much because the harnesses owners were using were originally meant for oxen and not donkeys.

She said as the year continues, FACE hopes to reach out to other cart owners and broaden the use of the powerset.

“The Powerset hitching system has the added advantage of being easy for people to manufacture even with limited resources.

It is simple and strong.

Paired with harnesses made from woven plastic netting, it provides an efficient and kind sustainable solution.

The harnesses and hitching systems can be made and maintained in the townships and villages,” said Copley.

Donyeli said only he and one other cart owner are implementing this new harness system at the moment.

However, this is likely to expand due to the availability and affordability of the materials.

Donyeli said that they will be showcasing the powerset at the National Arts Festival parade on Saturday.

The parade will start at Khutliso Daniels Secondary School in Joza at 11am.

She said its great and the donkeys would benefit.

“The new hitching system is definitely more practical and humane and the Grahamstown SPCA looks forward to fewer injuries once more carters are using it properly,” she said.

There are two Festival parades this weekend.

On Saturday the parade will start at Khutliso Daniels Secondary School at 11am.

This is where you can see Donyeli and his high-tech donkey cart.

The second Festival parade is on Sunday at 12 noon and goes through the town centre.