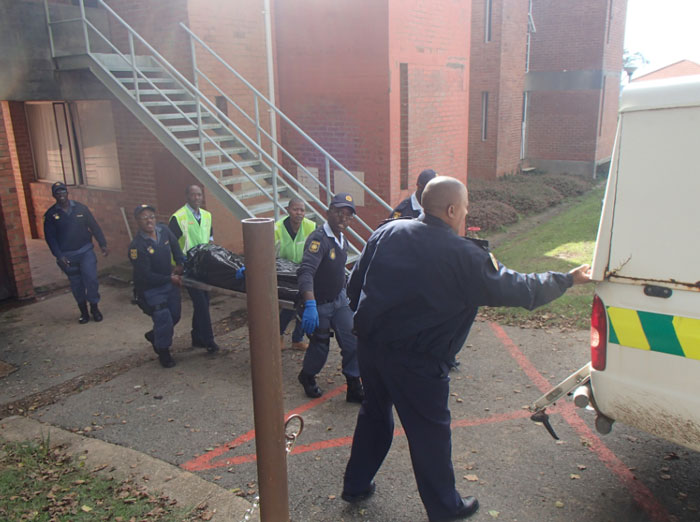 Grahamstown police have opened an inquest docket following the shocking deaths of a female Rhodes University student and a 34-year-old man believed to be her boyfriend.

Grahamstown police have opened an inquest docket following the shocking deaths of a female Rhodes University student and a 34-year-old man believed to be her boyfriend.

The horrific incident according to police happened at about 6am on Saturday 26 April.

The man believed to be the 21-year-old student's boyfriend allegedly found her in another student's room in Cullen Bowles residence, where both were discovered dead on Saturday morning.

Rhodes Dean of Students Vivian de Klerk released a statement confirming the identity of the female student as Amanda Tweyi.

"Ms Tweyi was a student in Rosa Parks house and was in her second year of a BSc degree. She comes from King Williamstown," said De Klerk.

Grahamstown Cluster Commander Brigadier Morgan Govender also made his way to the scene.

A few curious students started gathering around the Cullen Bowles residence where the tragic incident took place. Some stood on the balcony talking to those who were looking from the outside. They expressed shock over what had taken place just a few blocks away from their rooms.

Police spokesperson Lieutenant Luvuyo Mjekula said Grahamstown police received a report of an alleged shooting at Rhodes University in Grahamstown at about 6am on Saturday morning.

Mjekula said police responded immediately and on arrival found the bodies of a woman and a man inside one of the university's residences. "The body of the woman, a 21-year-old Rhodes student, had no visible injuries and a post mortem would be conducted to determine the cause of her death," he said.

The 34-year-old man's body, according to Mjekula had a bullet wound to the head and it is suspected that he may have shot himself. "Police have opened an inquest docket to establish the actual cause of the woman's death," he said.

"Students in the residences concerned are receiving Counselling assistance. The crisis line is also in operation," said De Klerk. "Arrangements for a memorial service will be announced in due course."

“This is a very tragic incident. Our deepest condolences to family and friends of the victims," said Govender. "The details and motive is still unclear and is being investigated.”

UPDATE: A memorial service for Tweyi will be held in the Chapel of St Mary and All the Angels (Rhodes Chapel) on Wednesday 30 April at 3.30pm.

Campus shooting. I never thought I'd see the day something like this happening at Rhodes.

Every few years at Rhodes there's a domestic shooting in one of the residences. Lord why

Gender-based violence incident at Rhodes leaves two dead. The University has an obligation to pursue this fully. http://oppidanpress.com/rhodes-campus-shooting-leaves-2-dead/ …

I'm so shaken by the shooting at Rhodes. My heart is bleeding for her.

If this ain't a sign that Rhodes better step it up with CPU security, then I don't know. Unbelievable #RhodesShooting

Previous ArticleTactile books: “I read with my hands”
Next Article Flower festival moves up the hill