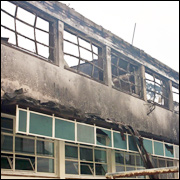 Hoërskool PJ Olivier principal Piet Snyders estimates damage in a fire at the school this week to be at least R1 million, with its new computer labs destroyed.

Hoërskool PJ Olivier principal Piet Snyders estimates damage in a fire at the school this week to be at least R1 million, with its new computer labs destroyed.

Seventy-two computers he school’s four-month-old IT labs and three servers, including the mainframe server containing the school’s data and other content were destroyed in the fire, which started in the veld in the valley behind the school soon after midday and quickly spread to the buildings.

The school was evacuated and nobody was injured. The cause of the fire is not yet known.

Teachers have been sharing the school hall for classes this week with several classrooms, as well as the biology laboratory, damaged by water and smoke.

While the extent of the damage has not yet been established by an assessor, Snyders estimated damage to the building contents to be at least R1 million.

The Makana Fire Department dispatched two fire-fighting teams after receiving an emergency call at 12.44pm – one to the school and one to the bottom of the mountain behind the caravan park. They'd had a report of a veld fire behind the Park Homes, rapidly moving towards the school, carried by a south-westerly wind.

The school's 300 pupils were safely evacuated within five minutes of the emergency warning, directed by teachers Joubert Retief and Manie Cronje. Teachers and senior pupils fought the fire with buckets and hosepipes until the fire brigade arrived.

An overhanging section of the roof of the school building close to the perimeter fence had been burnt and the roof of the double story building housing the computer labs caught fire. “I saw a lot of smoke and thought, here we need assistance before it gets out of hand,” said William Welkom, Manager of the Fire Department, describing his assessment of the fire when they arrived.

By 1.10pm backup arrived as park workers and the army’s fire brigade joined the efforts to contain the fire that quickly spread towards the road, as well as towards Mountain Drive. Eventually four teams with six fire trucks fought the fire in four places: two teams at the school; one where the fire had started and another in the surrounding area.

“This is the first big fire we’ve had since 2008,” said Welkom. Jason Lisher, a volunteer fire fighter and paramedic, was on the scene shortly after the fire started, and had some frightening moments when he jumped over a two-metre fence to put out the fire on the other side.

“The wind changed direction and the fire came straight at me and when I climbed back I couldn’t get a foothold, Lisher said. A journalist and another guy pulled me back over. If it wasn’t for them I’d be dead.”

Around 4pm the wind changed direction from south-westerly to a north-easterly. It was dark by the time the fire was brought under control, and the fire brigade left around 6.30pm. A fire fighter was treated for smoke inhalation, but no other injuries were reported.

Welkom said, “I’m proud of my team – we’ve done well to fight the fire from both sides. It could’ve been worse. We saved a lot of the building – 99 percent is not [structurally]damaged. The classrooms got minimal damage, [from]glass that burst and smoke damage.”

Praising the fire department for their quick response, Snyders said arson was not suspected, and no investigation into the cause of the fire had yet been called for. Having initially decided to close the school until Friday, Snyders decided on Thursday to continue classes using the school hall, the library and the residence as classrooms.

In a press release the school writes: “Our grateful thanks to the emergency services, Grahamstown schools, Rhodes University, the Grahamstown community at large and our Hoërskool PJ Olivier family, for your relentless attempts to help to contain the destruction.”

A disaster fund has been set up by the PJ Olivier community to get teaching back on track. Donations can be made to: Hoërskool PJ Olivier, FNB – 62011048627 (Cheque Account), Branch code – 210717, Reference – Rampfonds and the donor’s name.