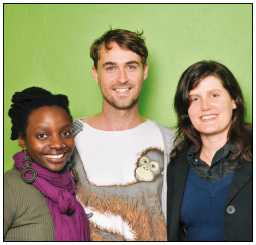 The Rotary Club of Grahamstown Sunset has announced the six finalists in the 2010 Grahamstown Citizen of the Year Award. These citizens were chosen from nominations submitted by the public of local heroes conducting extraordinary service.

The Rotary Club of Grahamstown Sunset has announced the six finalists in the 2010 Grahamstown Citizen of the Year Award. These citizens were chosen from nominations submitted by the public of local heroes conducting extraordinary service.


The Citizen of the Year Award was started in 2000 to recognise and honour local citizens who are examples of the Rotary maxim “service above self” and are selected by a panel of former Citizens of the Year. While it is usual to choose the Grahamstown Citizen of the Year from five finalists, this year two of the nominees tied in the careful scoring process, so was decided to present six finalists for the gala banquet that will be held on Saturday 23 October.
The six citizens who will be honoured are, in no particular order: the NGO The Arkwork Collective (Dylan McGarry, Injairu Kulundu and Jaime Alexander); local SPCA champion Jane Dalton; committed community worker Veronica Moodley; science educator Dr Kenneth Ngcoza; youth worker and women’s empowerment champion Debbie Sloane; and Jabez Aids Health Centre founder, Pastor Thys Smit.
The six finalists will be honoured at a special dinner-dance on Saturday 23 October at the Wyvern Club, Kingswood College, where the 2010 Citizen of the Year will be announced. Prof Michael Whisson (Citizen of the Year 2009) who is well known for his quick wit, will act as the emcee for the evening.

The Citizen of the Year and the finalists receive cash prizes for the charities of their choice. For the fourth year in a row, the major sponsor of this event is Pepper Grove Pick n Pay. Former Grahamstown Citizens of the Year are: Denim Kroqwana (2000), Dr Mary Knowling (2001), Mark Shelton (2002), Rev Glen Craig (2003), Sister Gwen van Heerden (2004), Advocate Nicky Turner (2005), Ntsiki Mphalwa-Mene (2006) and Grace Ngcete (2007), Janet Buckland (2008) and last year’s winner, Prof Mike Whisson – chosen for his devotion to civic affairs and human rights work in Grahamstown over decades.

The Arkwork Collective is a non-profit organisation whose focus is to facilitate the creation of sustainable artwork, whether it be visual, dramatic or musical, with marginalised youth in Grahamstown. The driving force behind the Arkwork Collective are all Rhodes University post-graduate students: environmental anthropologist Dylan McGarry, political science student Injairu Kulundu and anthropology student Jaime Alexander.

Since its establishment two years ago, the project has identified and worked with two groups of young people – a group of homeless young men who work on the street washing cars, and the other, a group of disadvantaged young people aged between 14 and 20.

The Arkwork Collective provides mentorship for these young people as well as a much-needed creative outlet in the form of various arts-based initiatives. The resulting artworks, created mainly from discarded material and municipal waste, have strong links with environmental conservation and topical issues such as HIV/Aids.

The Arkwork Collective’s theatre, storytelling and visual art forms have featured on the National Arts Festival and the television programme 50/50 on SABC2. The project has honed in on a sector of Grahamstown’s society which is brimming with creative potential but lacking in avenues to channel these talents.

The facilitators of the Arkwork Collective are totally committed to improving the quality of life of the young people they have mentored by nurturing their talents and empowering them.

In this way she was continuing a commitment to the cause of animal welfare that started much earlier in her life- in Kenya where she took a veterinary nursing course to increase her knowledge and understanding of animal care. When asked what drives her passion for animals, Jane replied simply, "Animals cannot speak for themselves".

Since retiring, Jane has given generously of her time and energies and she is respected as a tireless volunteer at the SPCA. Her contribution to the work of the SPCA in Grahamstown is great and varied. It includes administrative duties, the control of feral cat colonies in Grahamstown, the humane treatment of donkeys, timeous reactions to reports of stray cows and managing the municipal pound on behalf of local government.

She monitors the adoption of animals according to strict controls, doing post-adoptive home checks and giving advice on selecting compatible breeds. In addition to her involvement with the work of the Grahamstown SPCA, she has personally provided kennelling and boarding for up to 45 dogs and 25 cats. Jane’s exceptionally high work ethic is driven by her love of all animals – most importantly those who are abused or neglected.

Veronica Moodley is a hall warden at Rhodes University and a Project Manager of Lebone House, a haven for vulnerable children started by Kingswood College. She has been described as a small woman with a big heart and her calling has been the education and upliftment of youth from disadvantaged backgrounds in Grahamstown.

As no stranger to the challenges of growing up in a difficult home environment, she has dedicated her energies to enabling young people to tackle problems such as substance abuse and issues related to unemployment and poverty. Veronica started out working for Famsa and then, motivated by her love and concern for young people, she joined Reach – an interdenominational youth organisation.

Subsequently, she and her husband started an Eastern Cape branch of Gen-X, an organisation whose vision is the identification of young leaders and role models in communities afflicted by the scourge of poverty, crime and alcohol abuse. In her work with the youth Veronica has used a combination of dance, drama, leadership training and spiritual enrichment to help young people explore their potential and deal with issues arising from their difficult home circumstances.

Her motto is: your background should never determine your future. Veronica holds a Bachelor of Social Sciences degree from Rhodes University and is married with a young child. She is a shining example of success to those young people in Grahamstown who are faced with more obstacles than opportunities.

Dr Kenneth Mlungisi Ngcoza is a born and bred Grahamstonian. He has rendered noteworthy service in his professional capacity as an educator and through his involvement in a variety of community-based organisations such as Hospice (which he chairs), Gadra, and the Governing Body of Graeme College.

Dr Ngcoza lectures in Science Education at Rhodes University and co-ordinates the Science Teachers’ programme with Joyce Sewry. In addition to working with teachers, he runs the Khula Learners’ Project which provides weekly Maths and Science lessons to 40 learners from five historically disadvantaged schools in the townships.

As an educator, he is highly-principled, with a modesty that extends to acknowledging the supportive role played by his family, in particular his wife Nobuntu and his son Nkosiphendule. He has a positive attitude to life which inspires all who work with him – particularly his students. One of Dr Ngcoza’s former learners from Nathaniel Nyaluza High School recently completed an MSc at Rhodes University and is now studying towards a PhD in Chemistry at the University of Cape Town.

Dr Ngcoza is an example of the kind of dedication and vision that serves as a real inspiration to Mathematics and Science educators in South Africa.

Debbie Sloane combines her work as chaplain of the Junior School at Kingswood College with several significant community-based projects aimed at assisting and empowering women and children in Grahamstown.

Born in Bulawayo, Debbie moved to England as a child but returned to South Africa where she completed her schooling and obtained a teaching qualification. She distinguished herself as a teacher and then pursued additional qualifications in the area of theology.

Debbie arrived in Grahamstown 13 years ago but in that time she has successfully initiated several projects that testify to her devotion to holistic education and to the creation of an ethos where women and children thrive physically, emotionally, spiritually and financially.

Some examples are the Baby in Need project, which fosters babies from the Grahamstown Child Welfare; Kids with a Mission (Kwam) and RiverKidz, projects for children and young people; the annual Women Empowered by Christ Conference; and Women of Destiny (a self-improvement course).

She is the founder of Beedz, a skills training programme designed to equip single, unemployed mothers achieve financial independence. The programme is offered free of charge and provides participants with a chance to acquire knowledge and skills related to running a small business, computer literacy, jewellery-making, beadwork, baking, wire craft and sewing.

Debbie is also the author of the book series Food for Thought which deals with facing the challenges of modern life. Her mission is to raise innovative, powerful, honest and enthusiastic leaders who are ethically driven to bring about positive change.

Pastor Thys Smit is a minister of the Jabez House Assembly Church and the founder of the Jabez Aids Health Centre for people infected with HIV/Aids. Started in 2004 as a church outreach project, the centre was based in a small house in Extension 9.

Since then, the Jabez Centre has grown and diversified its programmes of care in response to the needs expressed by those afflicted with HIV/Aids. Currently it provides treatment for 194 registered Aids patients, which includes home-based care for 22 patients who are too ill to visit the centre.

In addition, the work of Jabez Centre extends to providing for children who have been orphaned as a result of Aids. In this regard the centre caters for 336 child-headed households and their records show that 460 children have been placed in foster homes.

The work of providing such varied programmes of care was originally conducted by church volunteers, but today the Jabez Centre provides employment for 34 carers with the assistance of funding from the Department of Social Development.

Born in Oudtshoorn, Thys has been a minister of religion in Grahamstown since 1975. Through his ministry he has always demonstrated particular compassion for society’s most vulnerable members: children, the sick and the elderly.

Pastor Smit has gone above and beyond the call of his office in a bid to reach out to those afflicted with HIV/Aids. A humble, tireless worker, he never turns his back on the needy but seldom receives the recognition due for his tremendous spirit.

Who do YOU think is most deserving of this year's Award? Vote in our poll here.